Yesterday I was inspired to grab my I camera and walk solo through downtown Rochester. First time going on a photo walk in a very long time. Pandemic meets George Floyd protests meets Rochester's own Daniel Prude controversy and protests meets people demanding our mayor, who just got indicted, to resign makes for a jittery time in my newish city. However, despite what the national news portrays, it's actually been quite peaceful during these turbulent months, most of the protests about Prude's death happening at night and in just a few select locations, none of which are nearby. 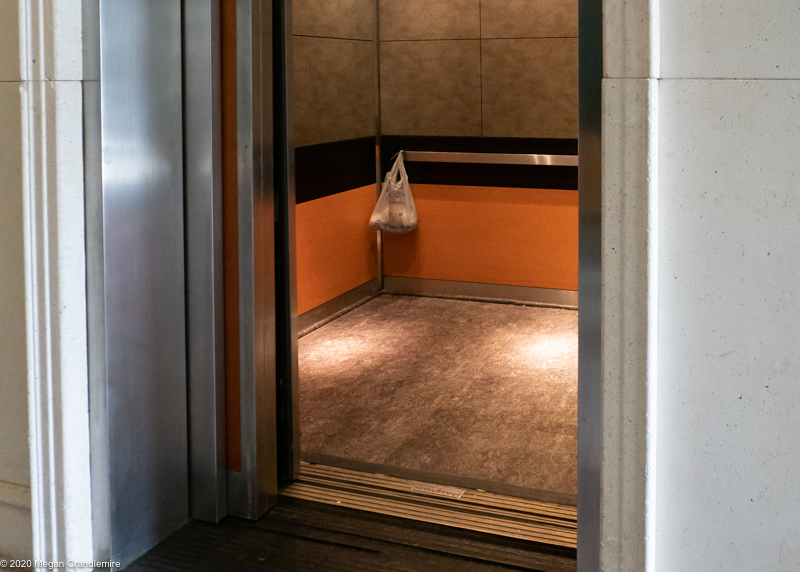 Now where did I leave my bag of onions?

If the shopper was planning on making french onion soup tonight they are really going to be missing these. 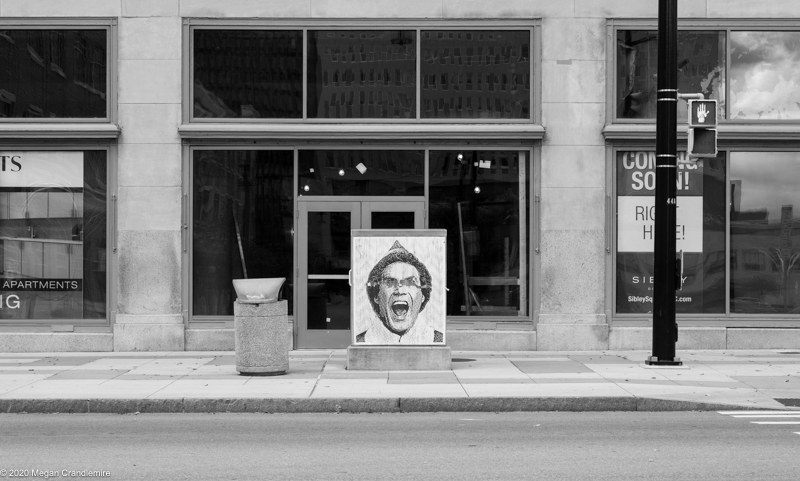 "I know Santa but I can't see him right now." 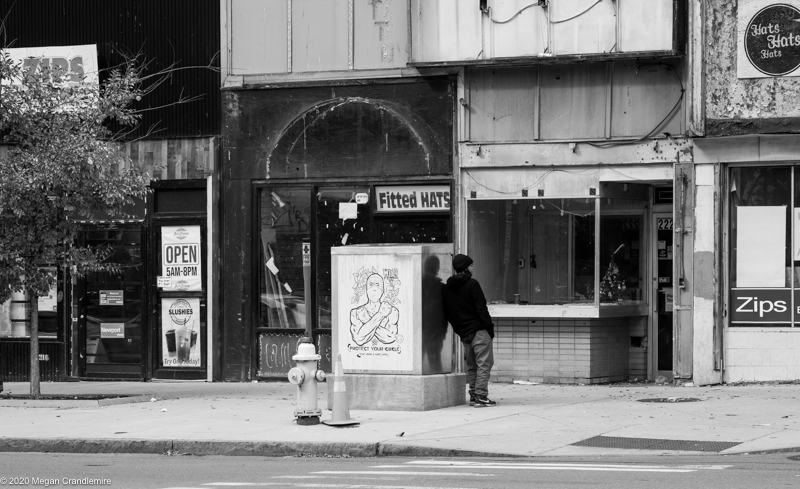 There are two blocks of Main Street that are a bit run down. Apparently in one of its hey days the area was all about hats. Seems "fitting" that my subject was wearing one. ;) 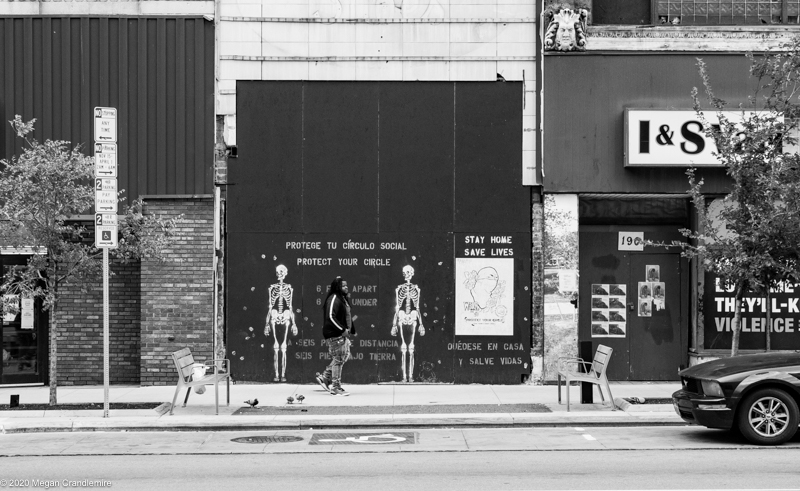 The skeletons have been on this wall for a few months. At first the man in my photo was walking the other direction. I wanted to get him between the two skeletons but I noticed him too late. Interestingly enough, he stopped just after the mural, immediately turned around, and walked the other way. And I was of course ready for him! It was like the Universe said to him, "hey, she wanted a photo of you in the middle, go back." So he did. Thanks for the assist! 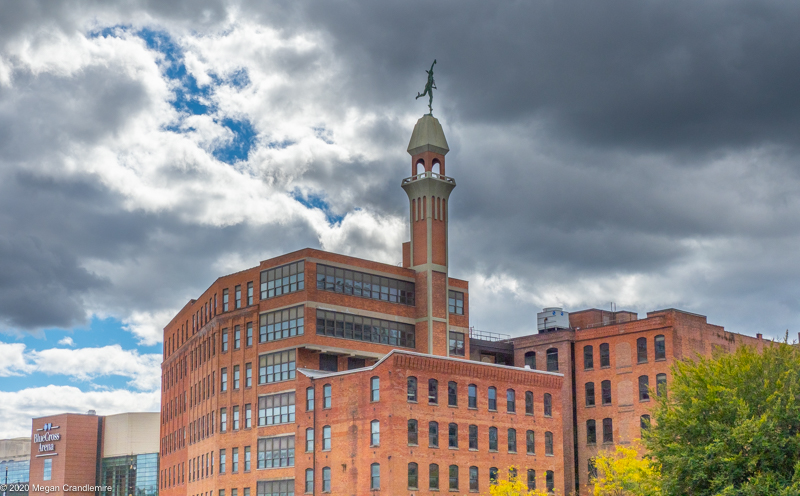 One of the best things about blogging is when you do a little research and stumble upon another blog with all sorts of info about what is in my photo. A mercury statue sits on top of this building. Found some amazing up close and personal photos of it on this page:  https://www.rochestersubway.com/topics/2014/05/up-close-and-personal-with-mercury-statue-rochester-ny/ 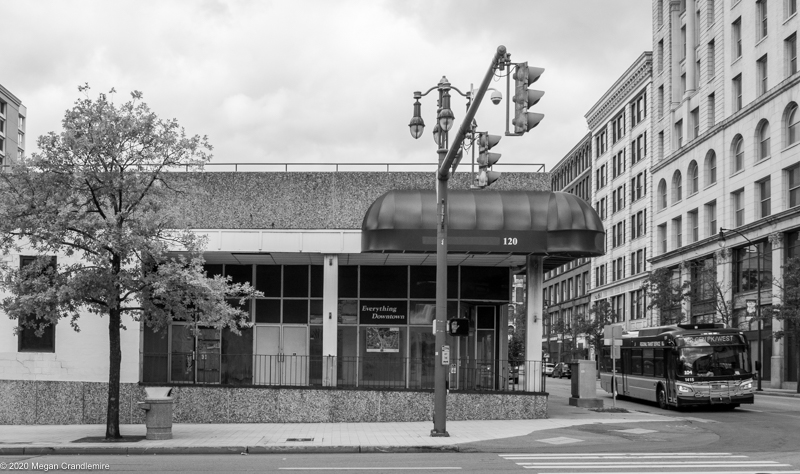 The window says "Everything Downtown" but the space has been deserted for a number of years. Looks to be a former visitor center. The Rochester Convention Center is across the street. I need to find out when Rochester's "heydays" were because they certainly are not right now. It's still an awesome city, love it here, but it is going through some transformation. Probably even more now that Covid-19 threw a monkey wrench into everything. 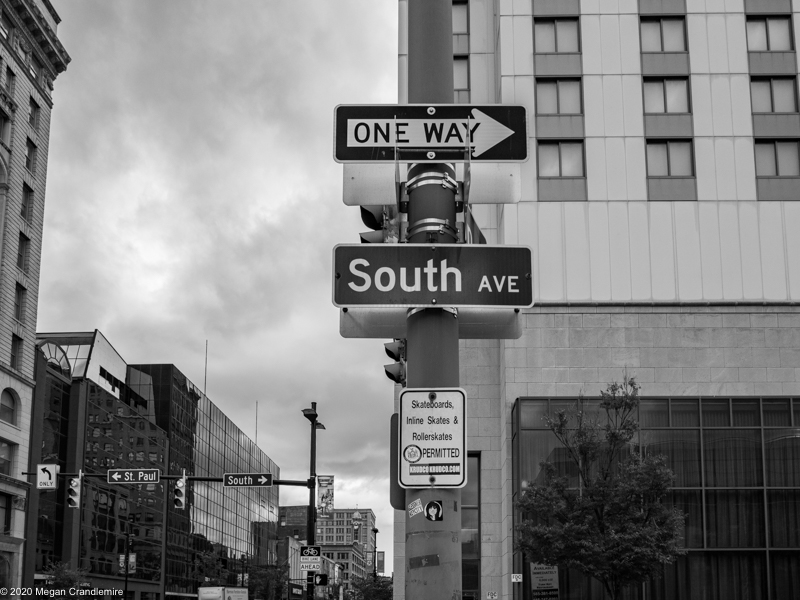 Permitted? I think not, but stickers can give you special permission.  :) 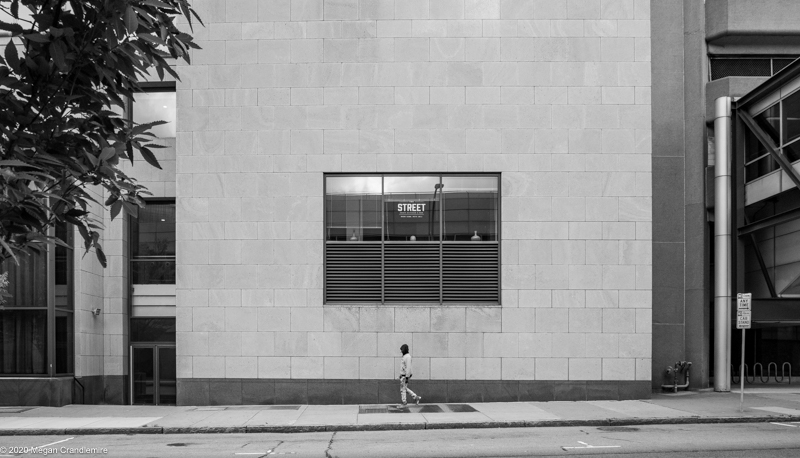 My FAVORITE street photography image of the day. It says "street"!!! And a guy was walking by at just the right moment. Another assist from the Universe! (hey, it's the little things these days that really matter) 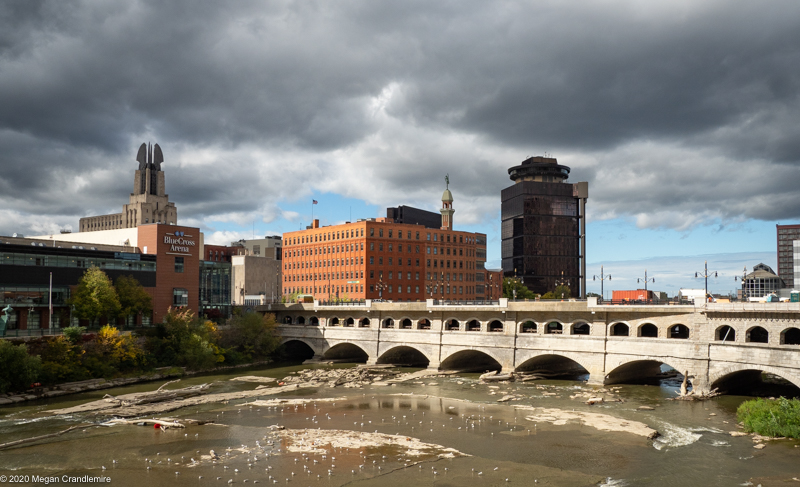 The I490 (Susan B. Anthony) bridge. It was a very dry summer and it shows. 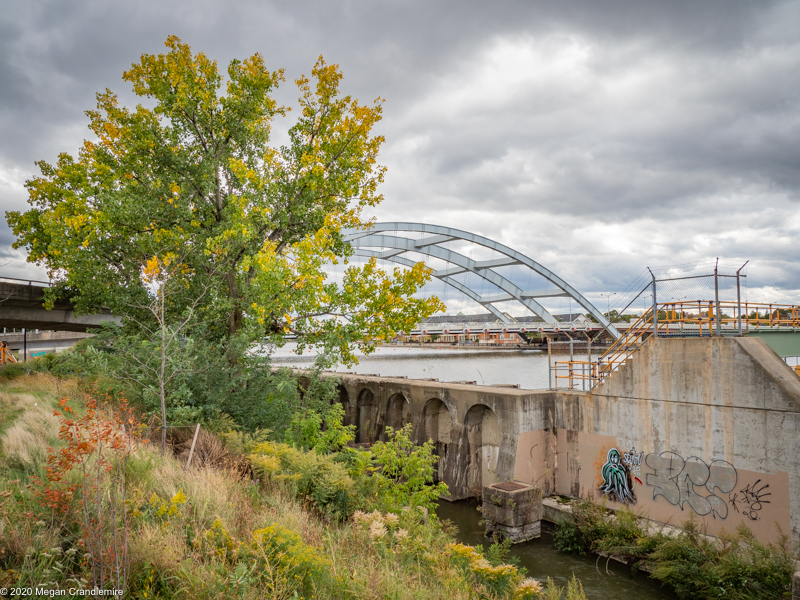 I took this from across the street. He actually called out to me "did you take my picture?" I fiddled with my camera and did not answer. I did not think he was asking so he could have a copy. I only took the photo because he fits my "Interesting Things" series where I photograph people carrying weird stuff in cities. 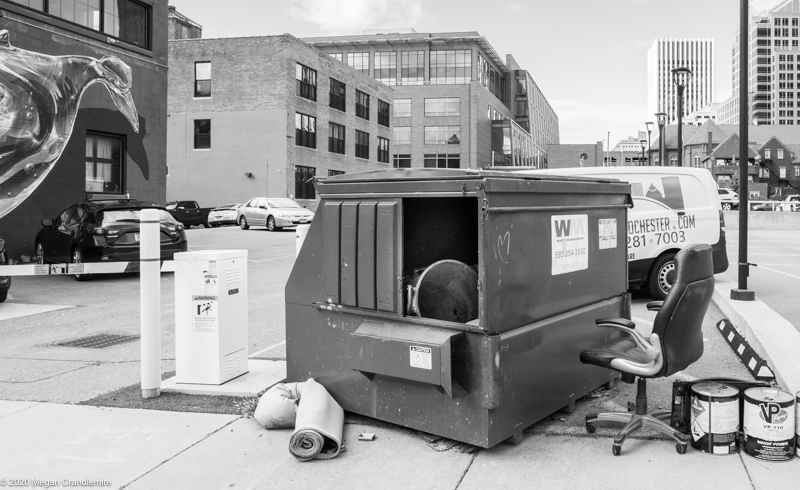 The trash can made it, the rug was not so lucky. 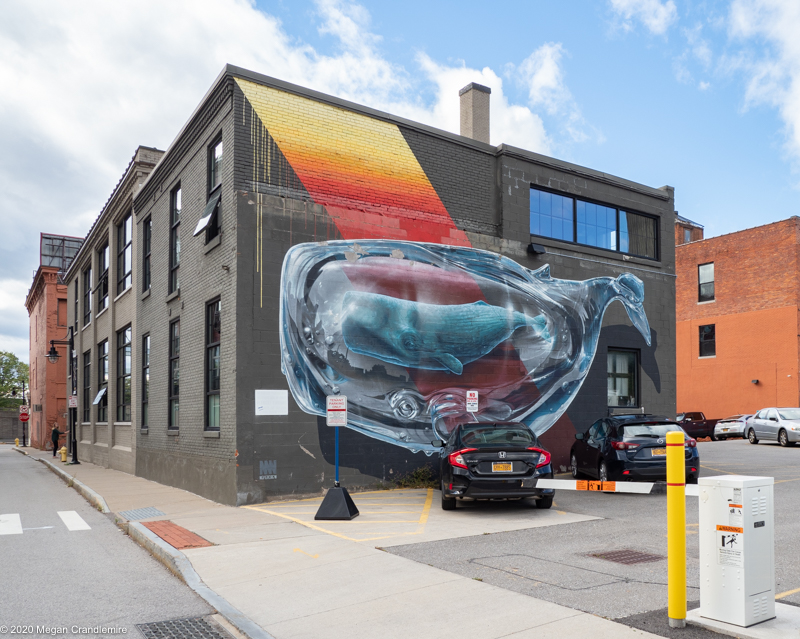 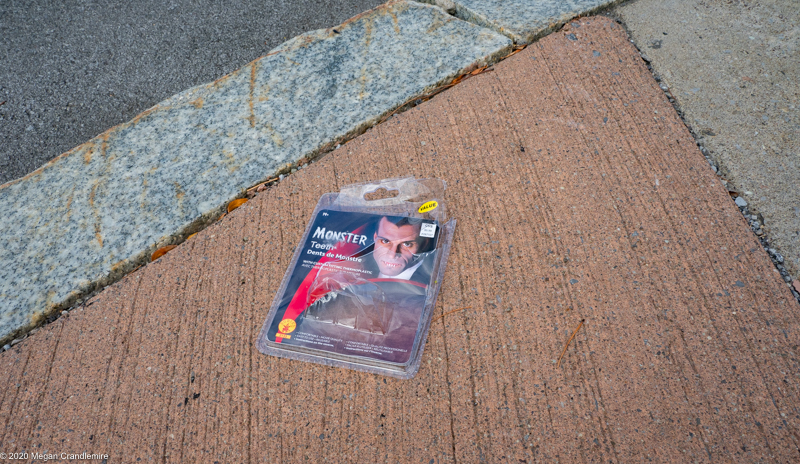 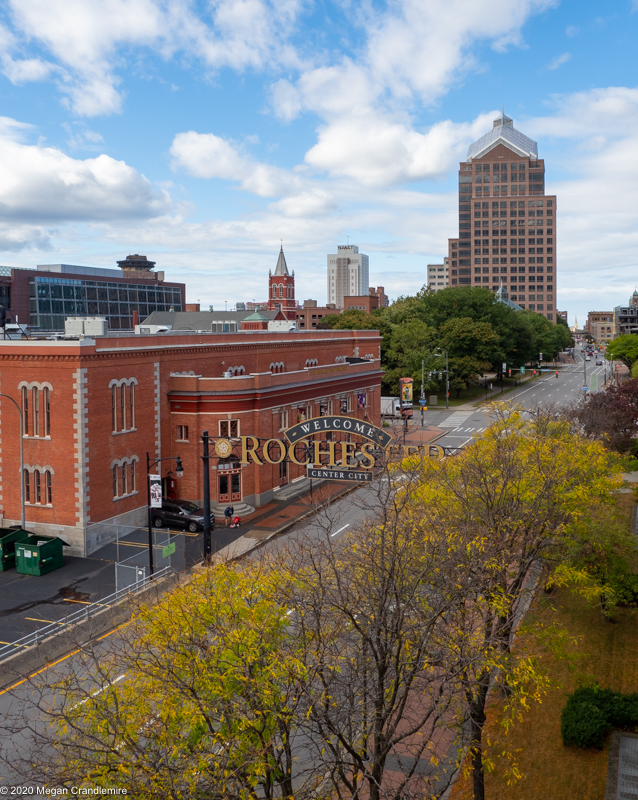 The last time I was on this parking garage roof it was maybe 10 degrees. We were visiting from Connecticut and I was trying to get a nightshot with taillight trails. I think it was on that visit that we decided to move here. 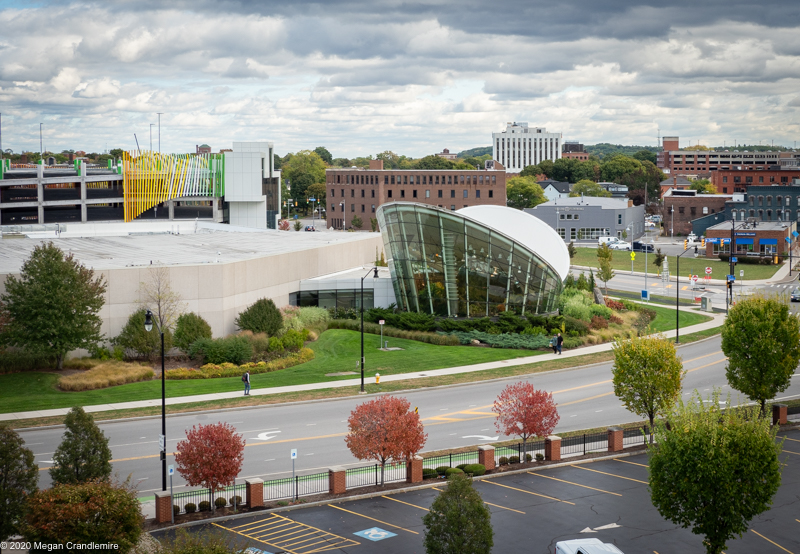 Butterfly Garden at the Strong Museum of Play. Trees are pretty right now. 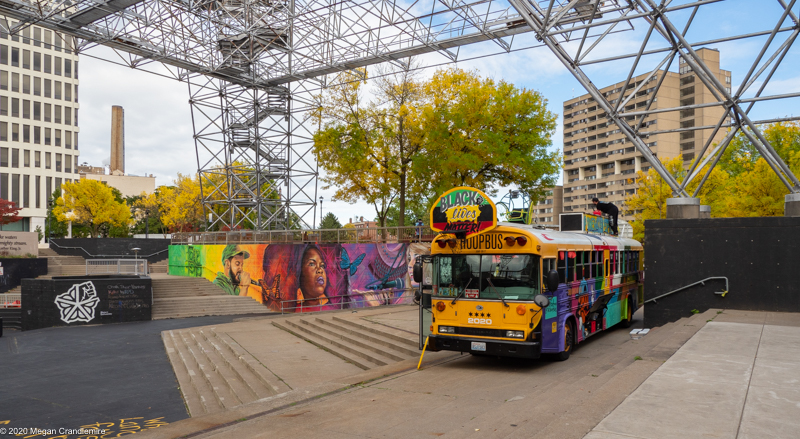 Martin Luther King Park. A Black Lives Matter event was starting to setup. This is an area where many of the protests either take place or get started. They also use this area for summer concerts. 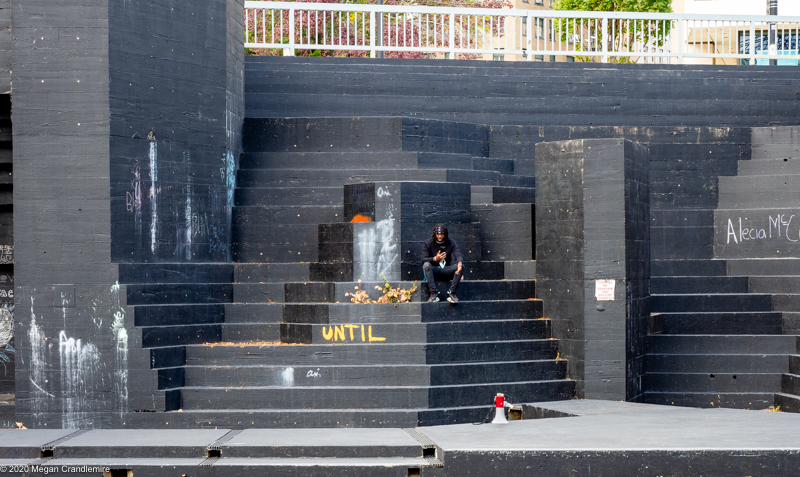 I like the megaphone in this image. Sometimes you need to speak your truth LOUDLY.

“There is no greater agony than bearing an untold story inside you.” ~Maya Angelou 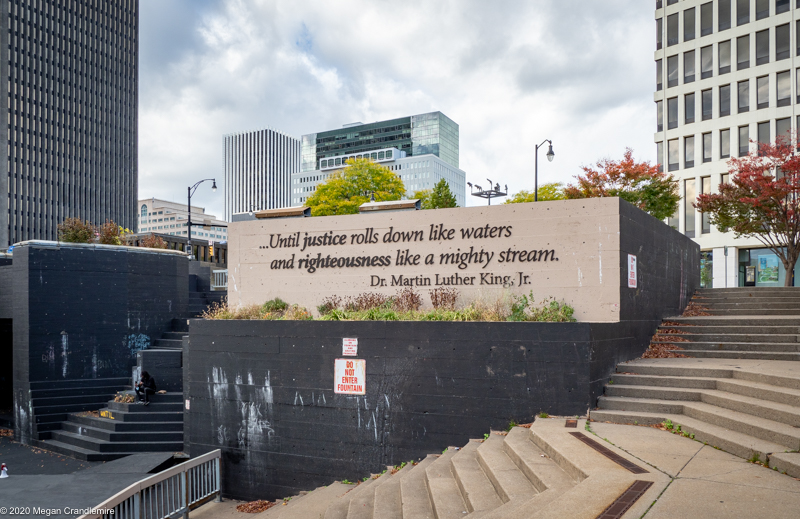 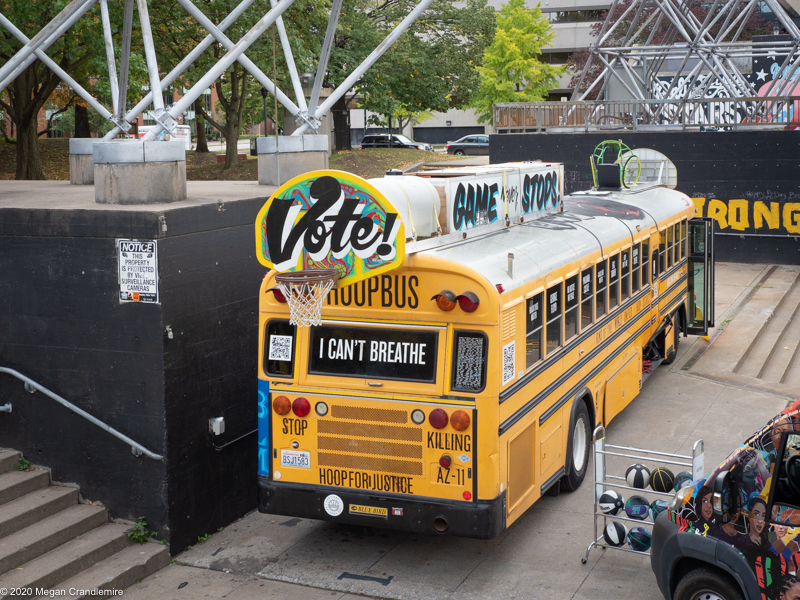 One crucial moment in Minneapolis back in March changed this country forever.

I lived in Minneapolis for one year, downtown actually. And then we started down the American dream road of home ownership. 25 years later we're living in a downtown again and Minneapolis is front and center. A twisty turny journey. 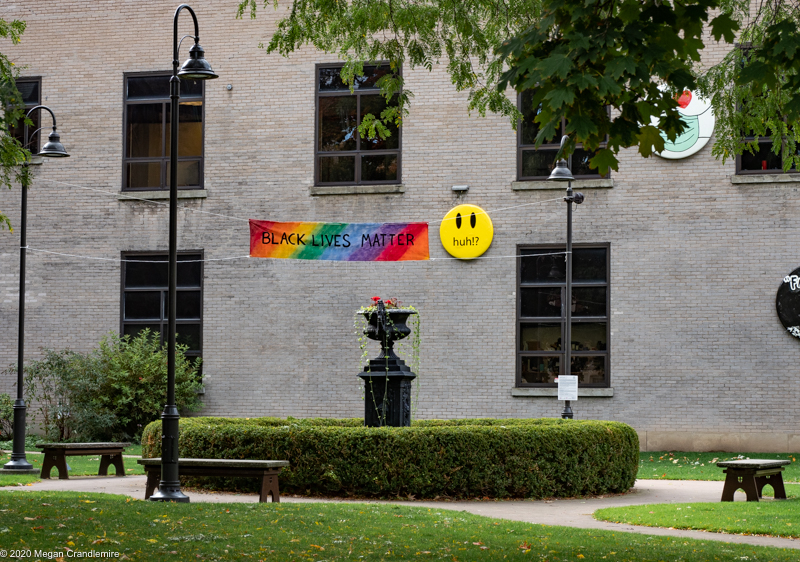 I titled this blog post "Out of Context" and this is why. It was interesting to compose this photo. The "huh?" button is several feet away from the BLM sign and was put on the brick wall several months ago. The banner went up recently. I could see this image being controversial depending on who is looking at it and what they know about the art installations in Rochester. It's all in the perspective we hold, isn't it?

Below is a broader view. 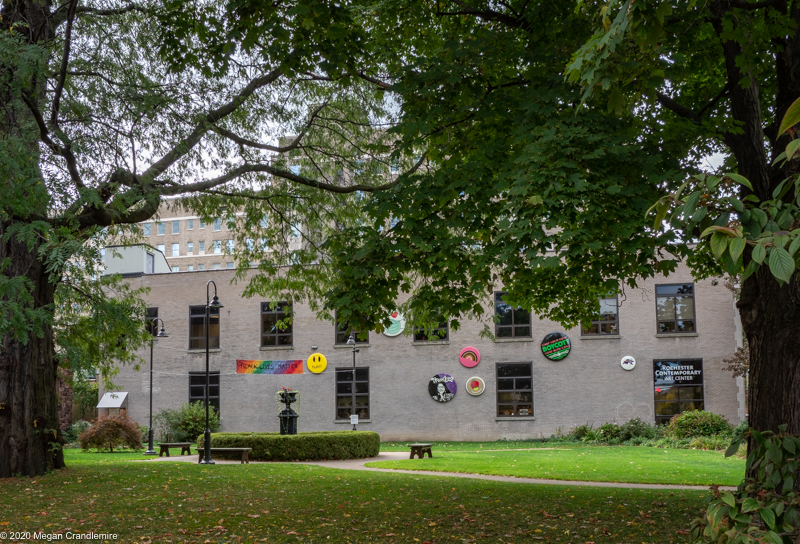 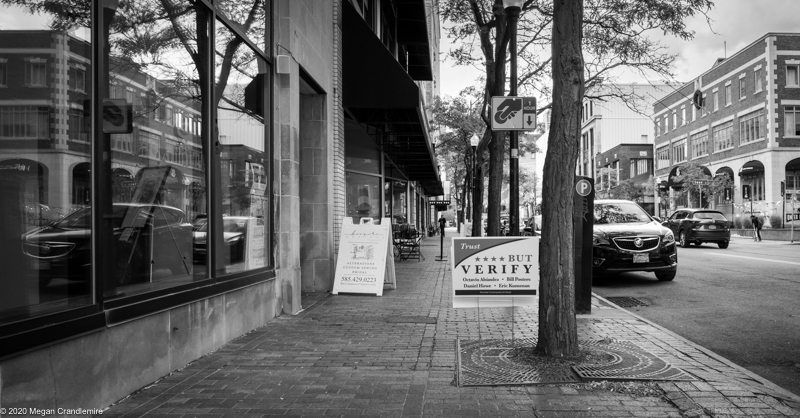 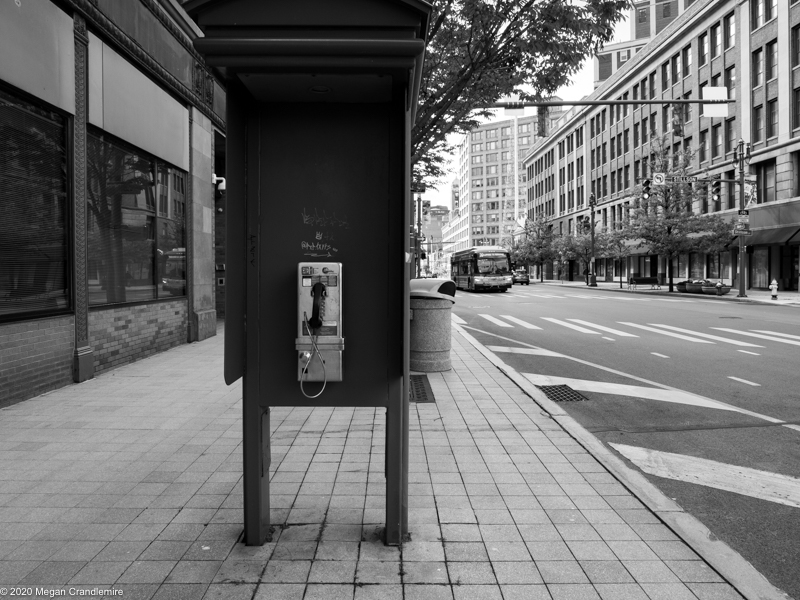 There is a photographer in the area doing an entire photo project on the remaining phone booths in the city. I look forward to seeing his book. I've definitely spotted a few in the last year, and most look to be in good working order. Unlike the ones I would see in NYC. Those were mostly being replaced by WiFi charging stations. 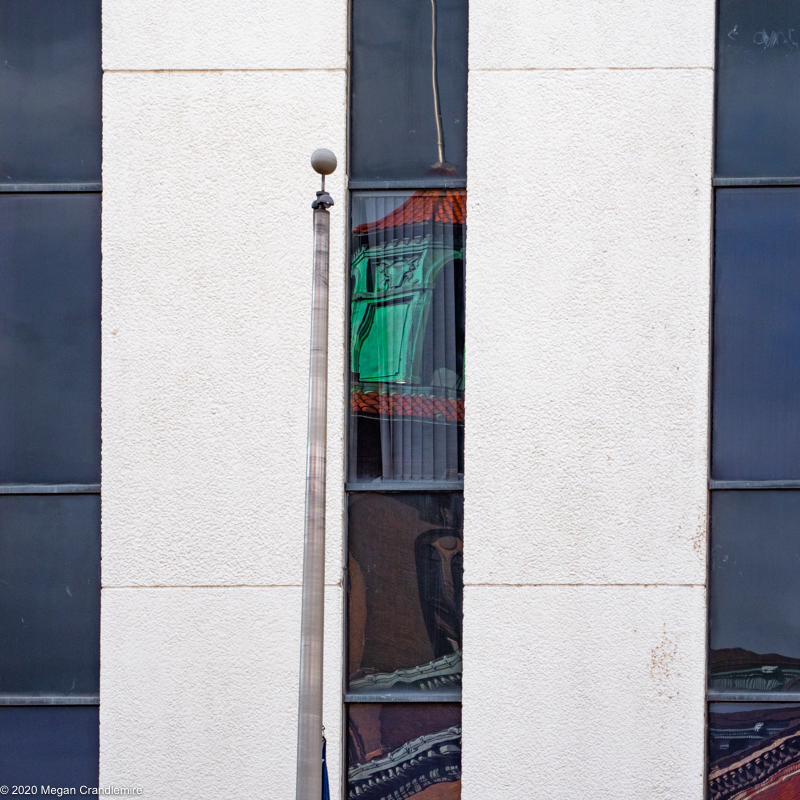 If you follow my work, you know I like a good reflection. The copper dome I can see from my kitchen windows. I did some Googling but did not find any info on this building. I will keep researching and add more when I find it.

Until the next Magic walk around Rochester...