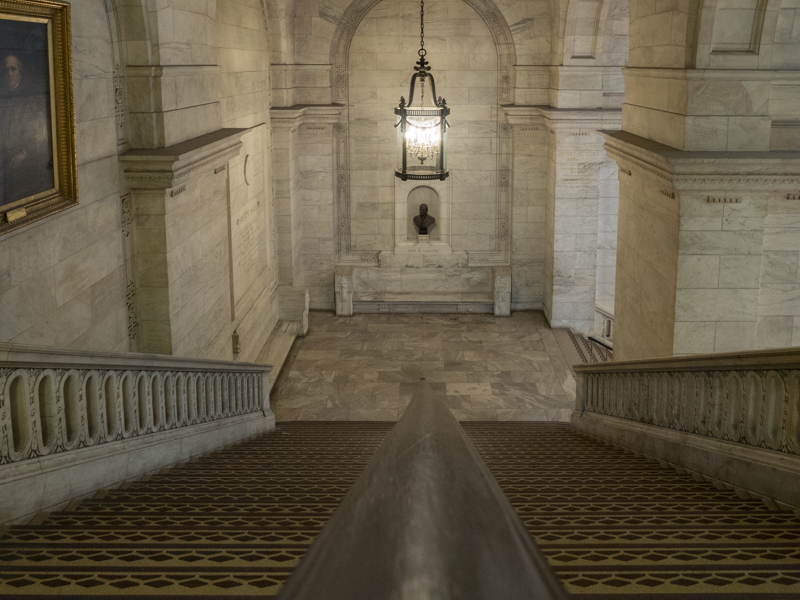 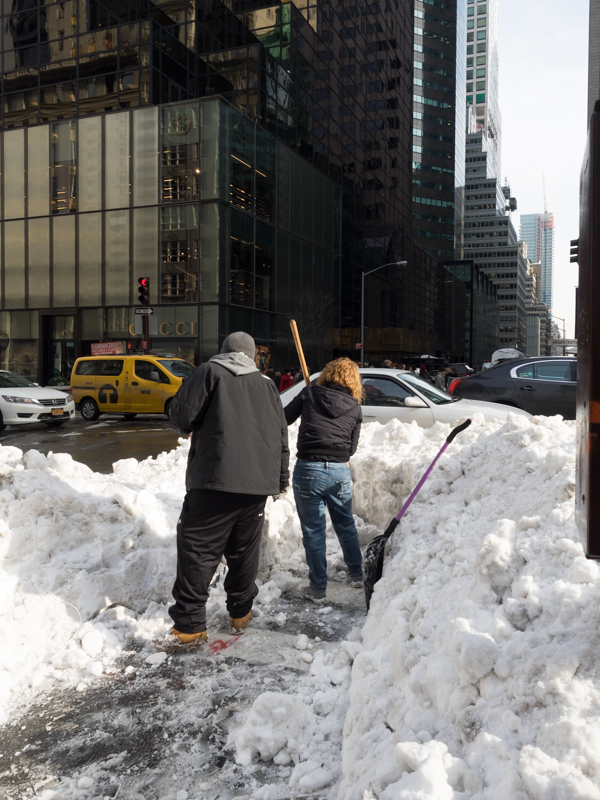 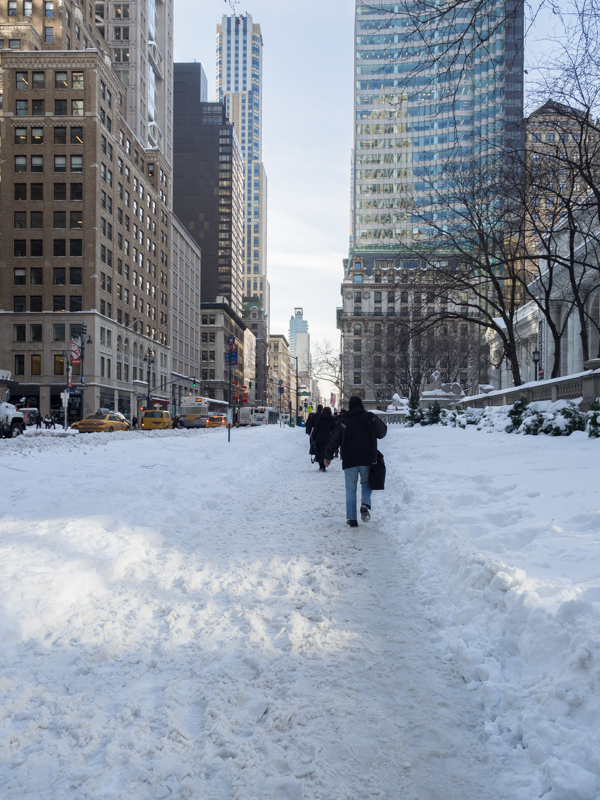 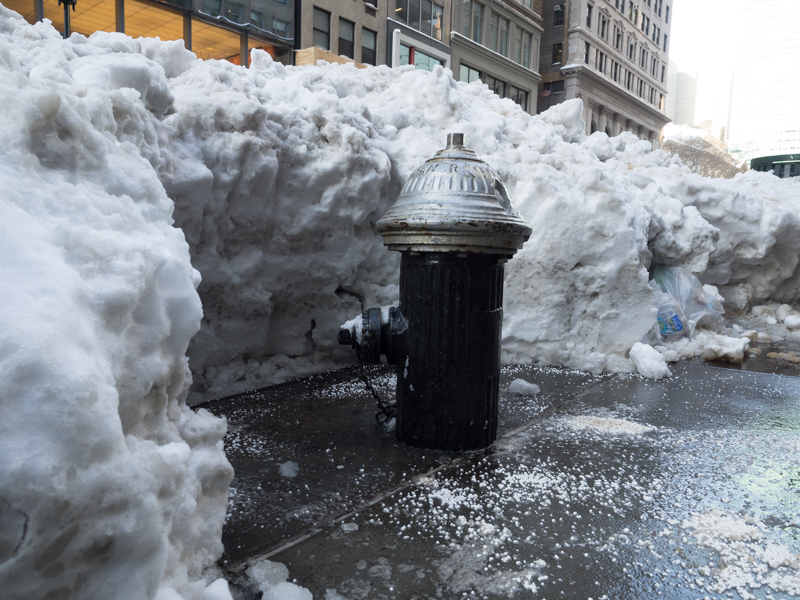 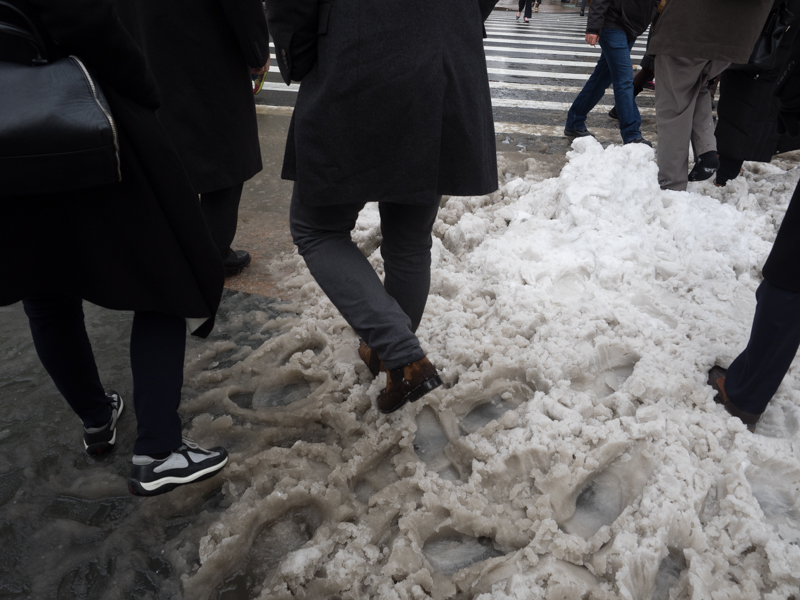 Interesting day to head into the city since the weekend brought a pretty historic snowfall and Manhattan got around 27" of snow on Saturday. I thought it would be a bit messy but that was an understatement. I wore my boots which I quickly found out were not water tight if you stepped in a puddle that got water over the laces of the boots; of course most of them were that deep. I was surprised that the area I stayed around, mostly 5th Avenue between the library and Central Park, was not more cleaned up. Then again, it's a huge city and the issue of where to put the snow and where the water is supposed to go is a big one.

And my least favorite scene repeated throughout the day: 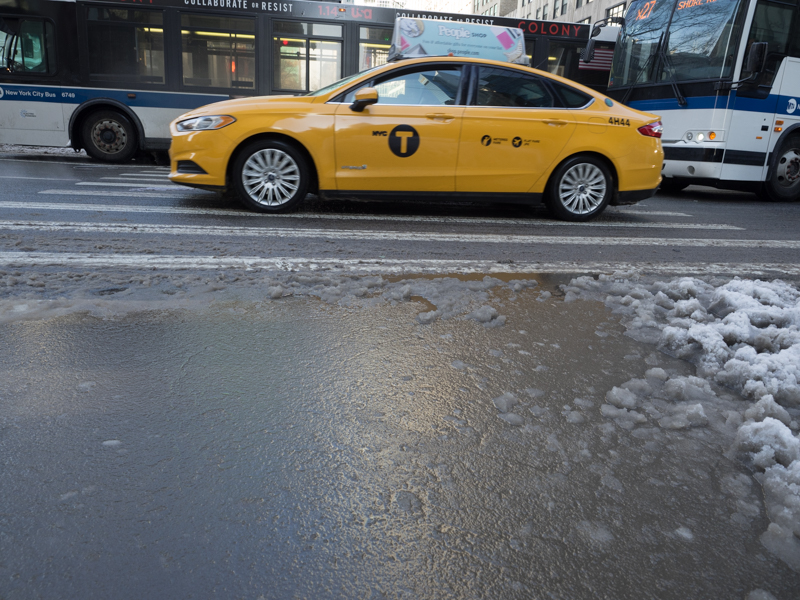 The image doesn't do the puddle any justice. It doesn't show how deep the puddles really were, some 3-5" deep in places.

On with the regular photographic journey... 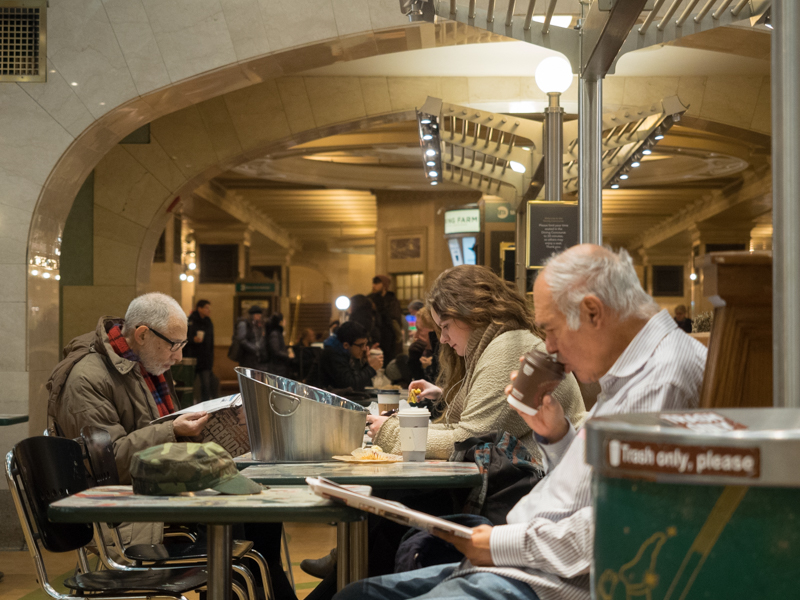 This scene is inspiring me to start a page on the blog called "Interesting things people have with them in the city."  The silver bucket qualifies the pretty young woman for this future page. 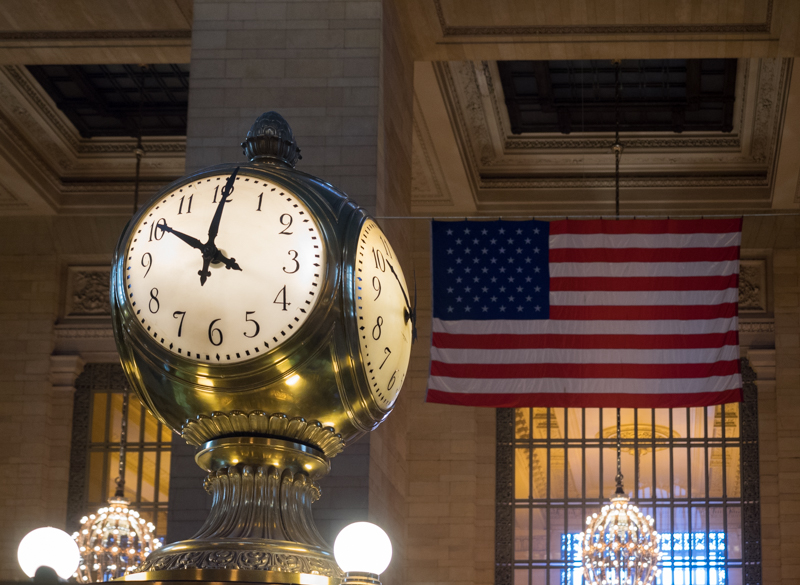 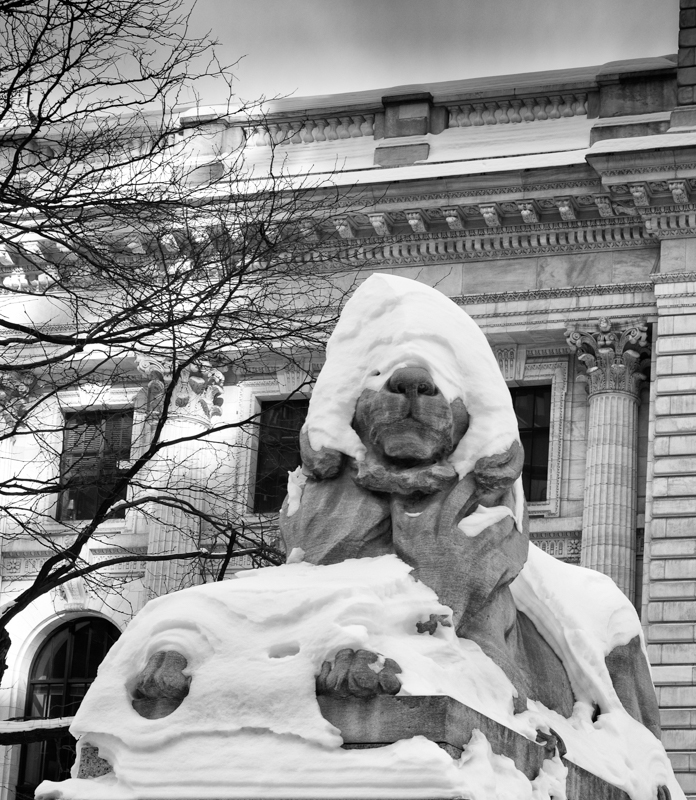 I call this one "Peek A Boo!"  Outside the NY Public Library on 5th Avenue. I learned during my tour that the outdoor lion statues originally had the lion mane more full and apparently people were all up and arms about the lions looking like pussy cats. So indeed the sculptor did trim down the manes. Public outcry can be powerful! 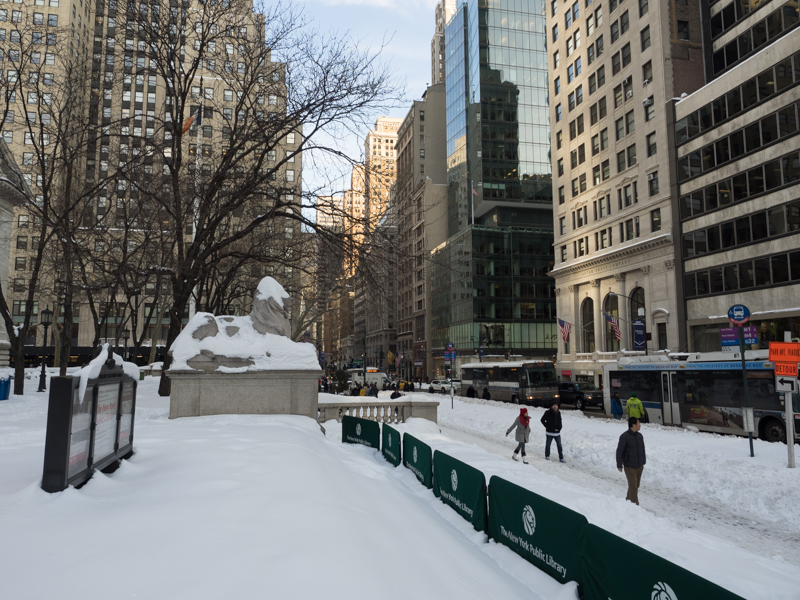 I am including this photo because there is a [scary-ish] story to it. I walked up a couple of stairs to the library and started to photograph the lion from the side to see what I could get from this perspective. Within a few seconds I felt someone pressed against my left shoulder. I was not on the main sidewalk and it certainly was not busy where I was standing; a bunch of thoughts poured into my head as I turned my head to the left to look. There was this skinny black man with a runny nose (blech) standing practically on top of me he was so close. He said to me "I would prefer if you didn't take my picture."  (Ummm, I didn't??)  Now my head was full of "oh, #$%*, I'm getting mugged on 5th Ave?". At the same time I didn't instinctively feel threatened, so I said in a calm voice, "I didn't take your picture."  And he responded, "I would prefer if you didn't take my picture," to which I responded sternly, "I won't."  And he walked away. I pretty quickly walked up to the entrance to the library. I turned to look at where he went but he was gone.

What was interesting about the timing was that I was thinking the last week or so about safety and this 52 week journey. Was I putting myself at risk walking around with a nice camera alone in the city. A country bumpkin girl a bit clueless as to how safe I really was in each chosen location of the day. At the same time, in the last week I wrestled with my spiritual perspective on life and that I create everything I experience, the good / bad, the scary / safe. Perhaps this was my way of creating a somewhat scary incident to show myself that indeed, I could handle an up close stranger, that I didn't feel immediately threatened, I stayed composed and there was a happy ending. I'm going with that for now... 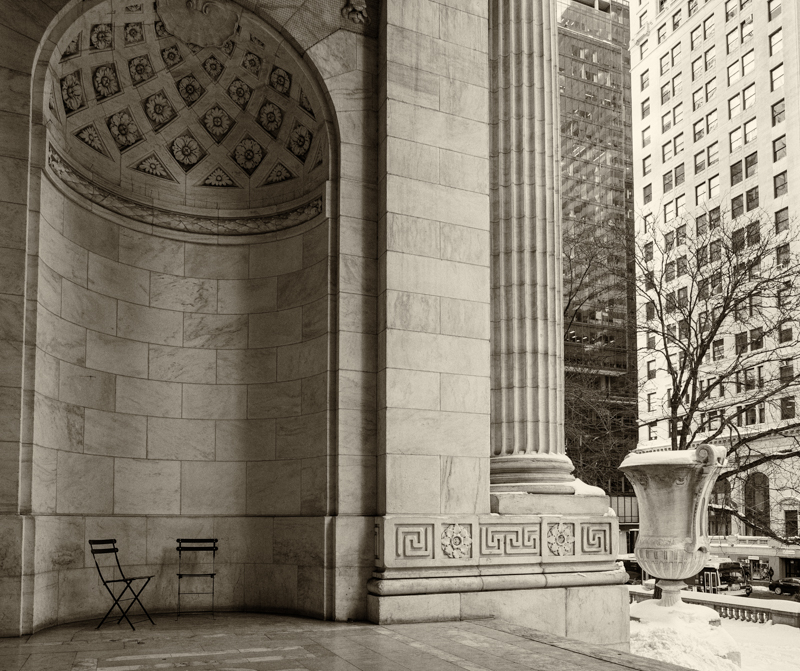 I liked the summery looking chairs on the left versus the snowy scene on the right.

I took a tour of the library with a lovely French woman docent who has been in this country 50 years but never lost her accent. She talked a mile a minute. Had a nice sense of humor and showed us some interesting places in the library. She rattled off so many facts I can't remember many but I do recall one about the structure - the library was built on a former above ground resevoir. There is a photo below that shows the very base foundation of the library is actually the remains of the reservoir walls. 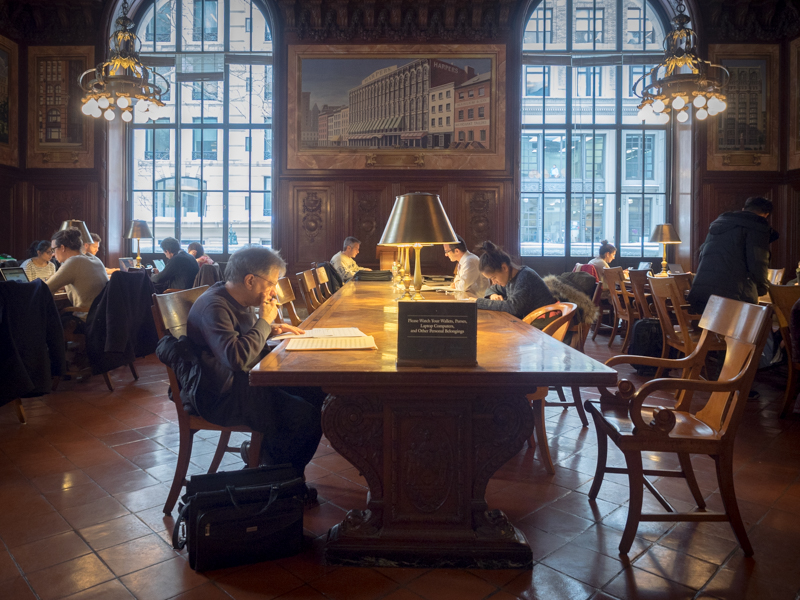 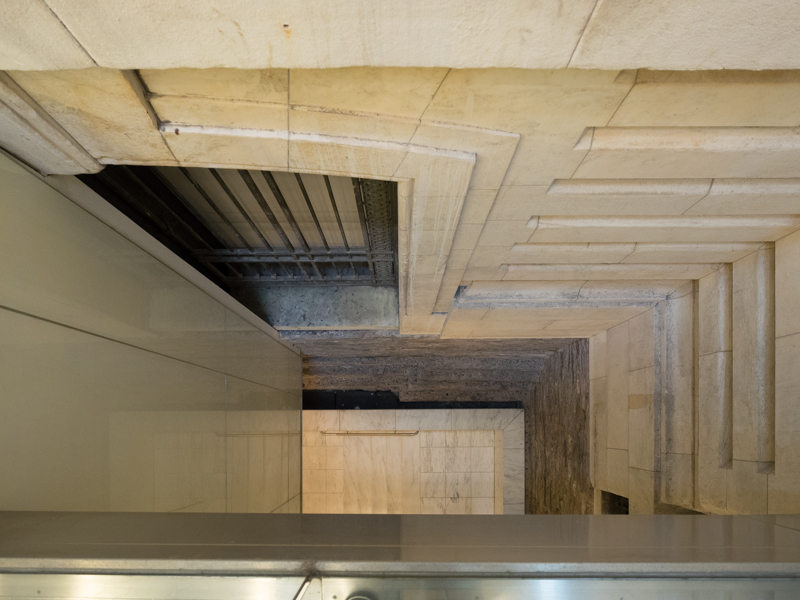 The darker gray is the reservoir foundation. 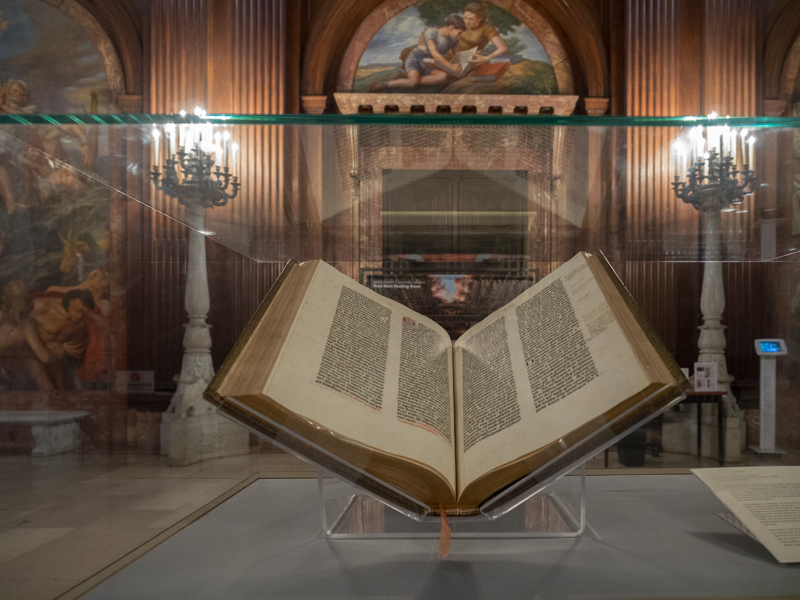 Gutenberg Bible - the tour guide mentioned she just finished a wonderful novel called Gutenberg's Apprentice. It was fiction but based on reality. I may check it out (so to speak!). 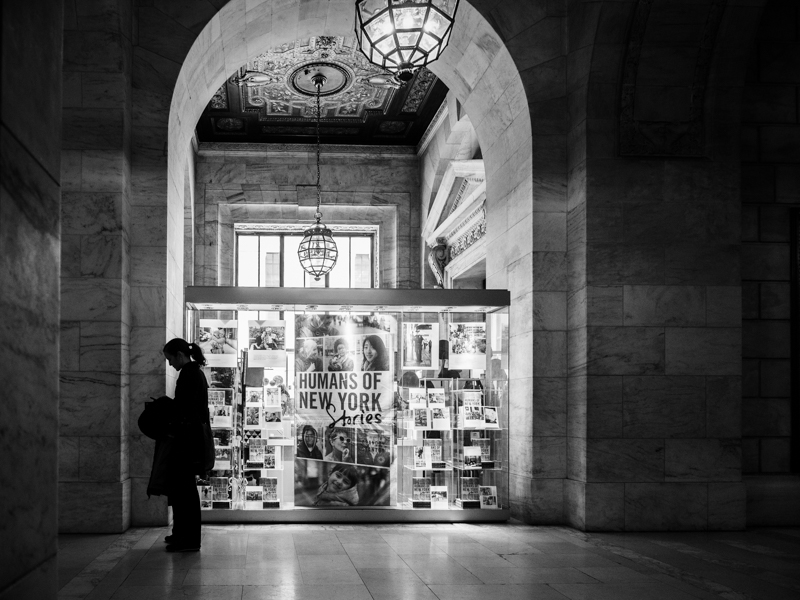 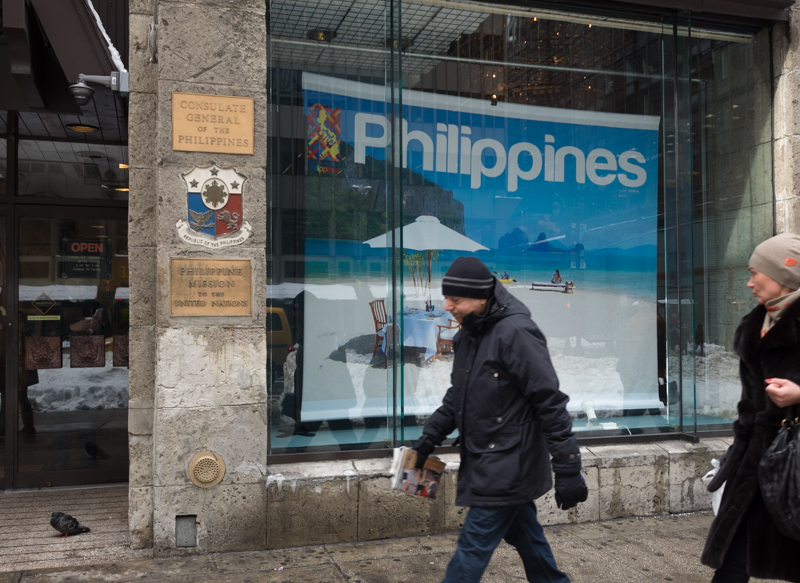 After the library tour, I headed up 5th Avenue towards Central Park although I secretly wished I was headed for warmer client like the Philippines. 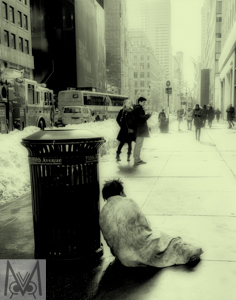 The most dramatic picture I've taken in my 4 weeks in the city. I generally avoid taking pictures of the less fortunate but this scene was pretty moving. I had walked by her as she was facing me, she was squirming in the blanket like a glo worm. It was so dramatic and alarming. As usual, I felt helpless and unsure of what the right thing was to do. I turned and shot one photo which is what you are viewing. 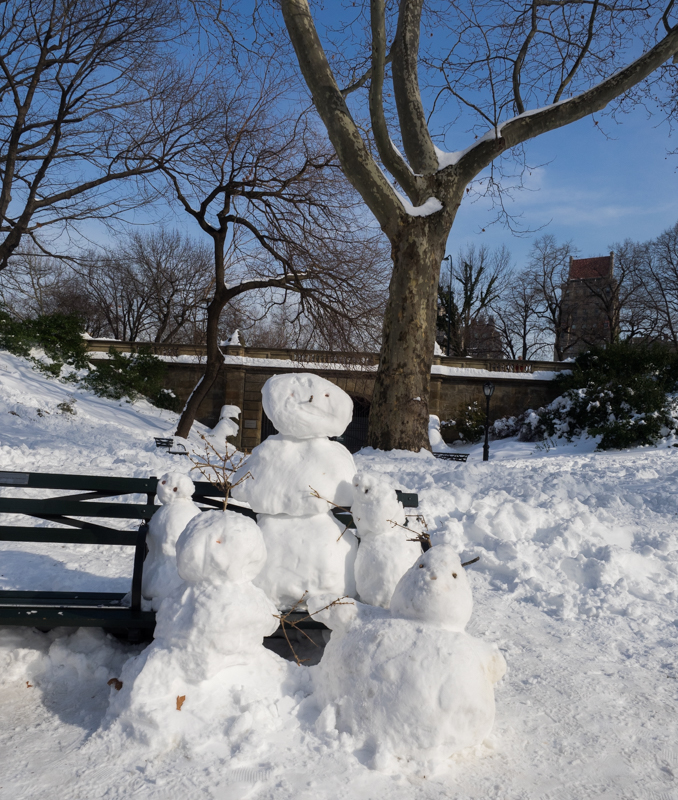 A more cheerful picture of a snowman family in Central Park enjoying the beautiful day. 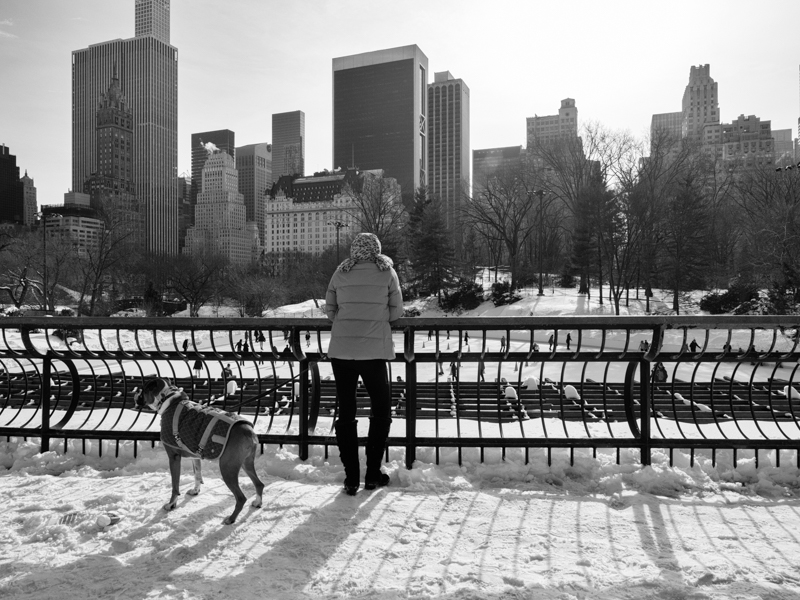 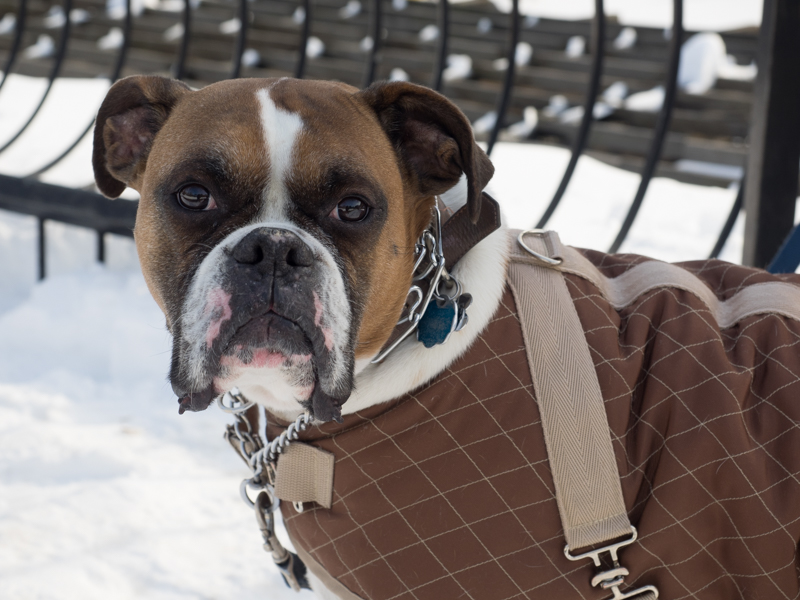 I saw this woman watching the skating at Wollman Rink in Central Park. I think her dog's winter clothing cost more than all of my clothes I was wearing combined. I quietly snapped a few shots from behind and then from her right side. She turned and spoke to me and asked if I got any pictures of her dog and could I email her a few photos. I took her email address and shot a few more feeling more comfortable since she gave me permission. I wish I had asked her if I could do a portrait of her. She was gorgeous, looked affluent. But I'm still working on my street photography skills. I did email her the photos. She wrote me back and told me she loved all of them and would pay for them. I emailed her back and asked for a very small amount of money to help fund my project, never heard back. That's ok, it was still a great experience. I do need to talk to more people during my day. 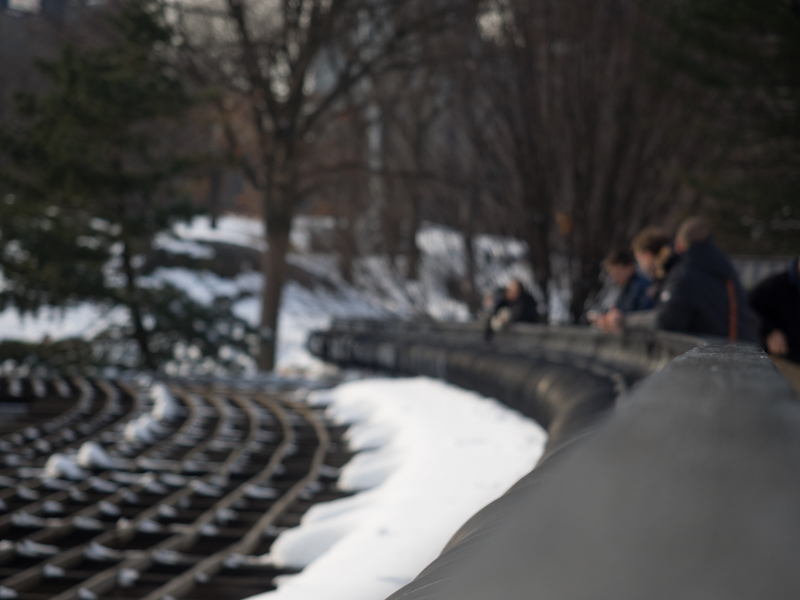 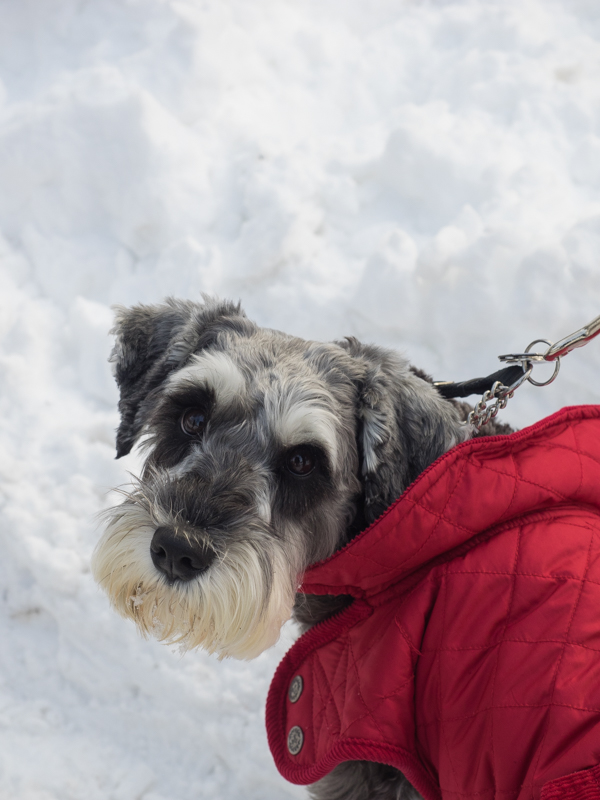 Doggie of the day. 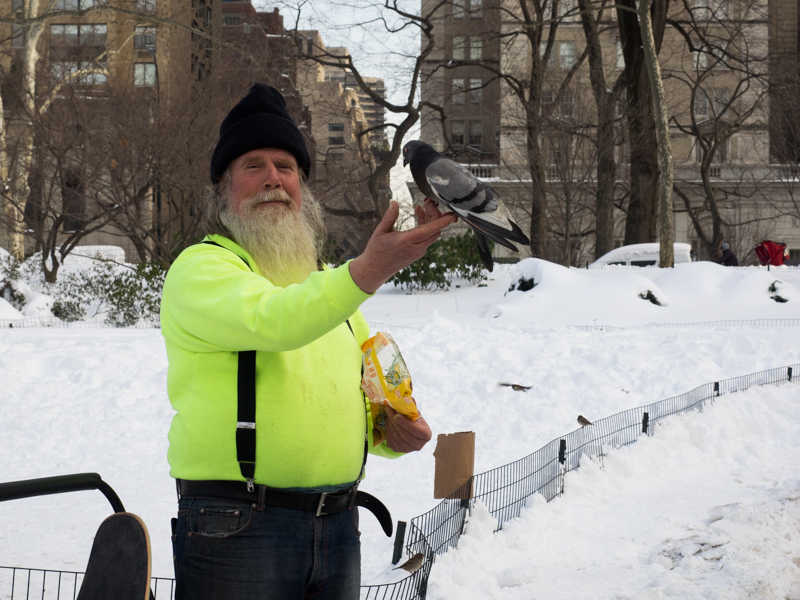 Talked to this man. He told me he's usually selling maps up by the entrance of Central Park but it wasn't good map selling weather. He was in the park feeding the pigeons peanuts. Mentioned that the horse & carriages have not been in the city for almost 2 weeks and that the pigeons were hungry because they got a good amount of their food from the horse feed that falls on the ground. The birds loved him. 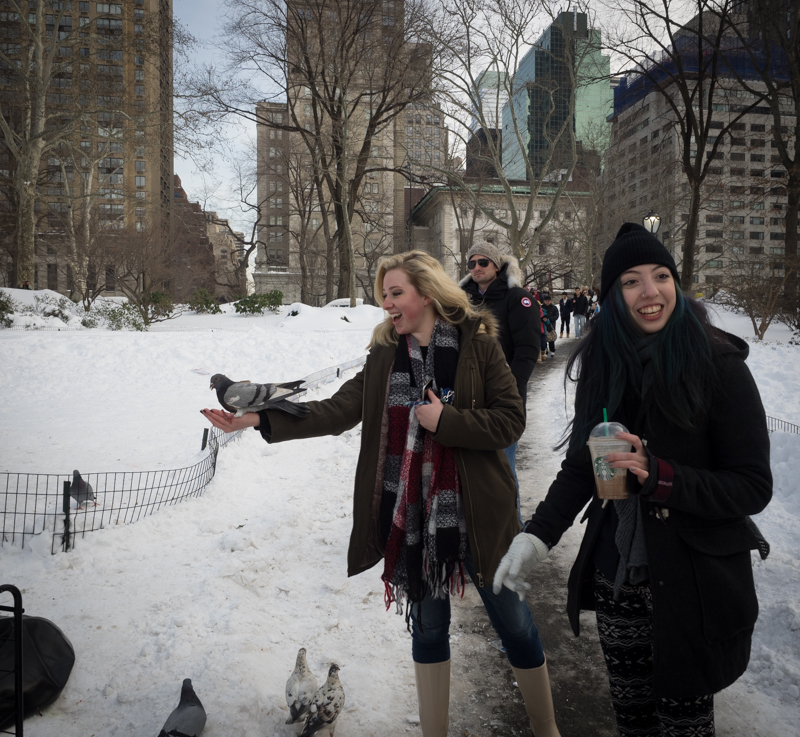 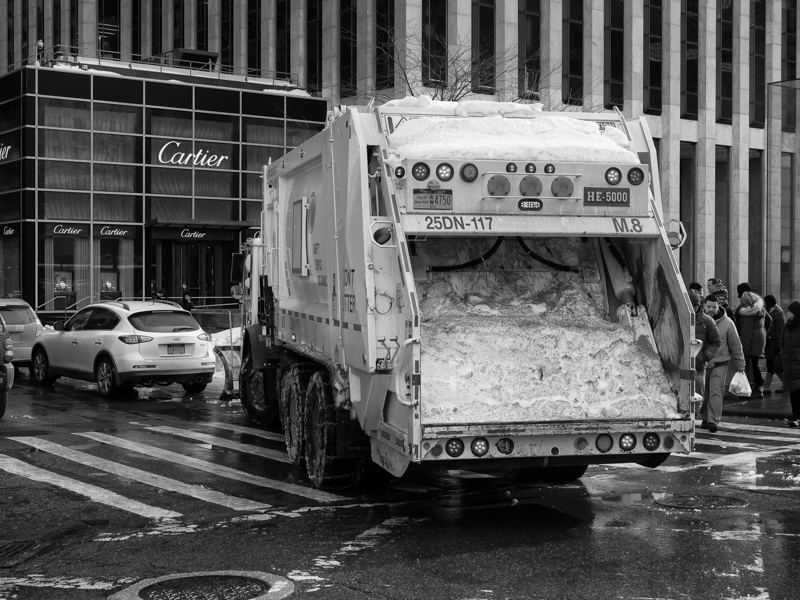 "Cartiering" away the snow. ;) The garbage trucks had plows on the front of them. Makes sense but it was something I had never seen before today. 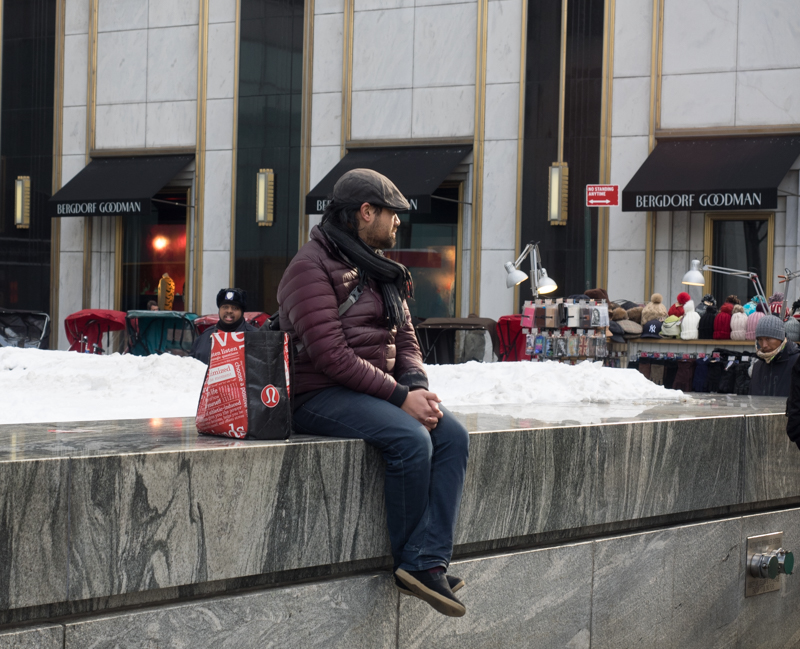 So this guy makes the cut because I saw him twice that day which I always find a bit weird since there are thousands of people going in all different directions constantly. As I approached Central Park about an hour earlier, I noticed this guy only because he was carrying a Lulu lemon bag. I know they sell men's clothes but it just struck me that he had the bag, a quick passing thing. As I headed back to Grand Central, I decided to walk down 6th Ave. instead of 5th for a change of scenery. There he was again, the Lulu guy! 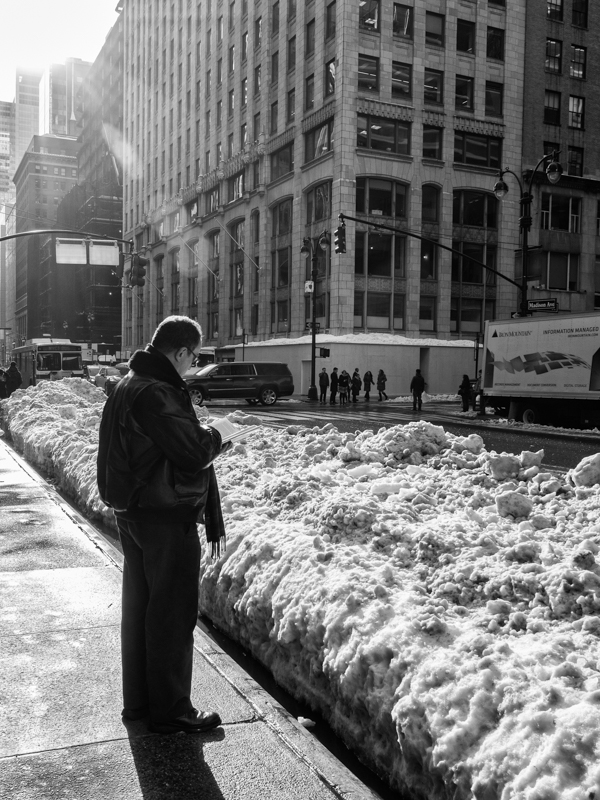 This man was reading a book. Standing in the middle of the sidewalk reading. Clearly he wasn't getting ready to cross the street with all the snow in front of him, so the scene just struck me as odd.

This is a snapshot of an advertisement for Chase bank. I found it creepy. Without any words, they seemed to be depicting that they have pretty much gotten rid of all the humans, unless you need a little help with Business Services, then you can go to the left and talk to the last human employee they kept on, you know, just in case. Otherwise, our robots would be happy to help you with all of your banking needs. 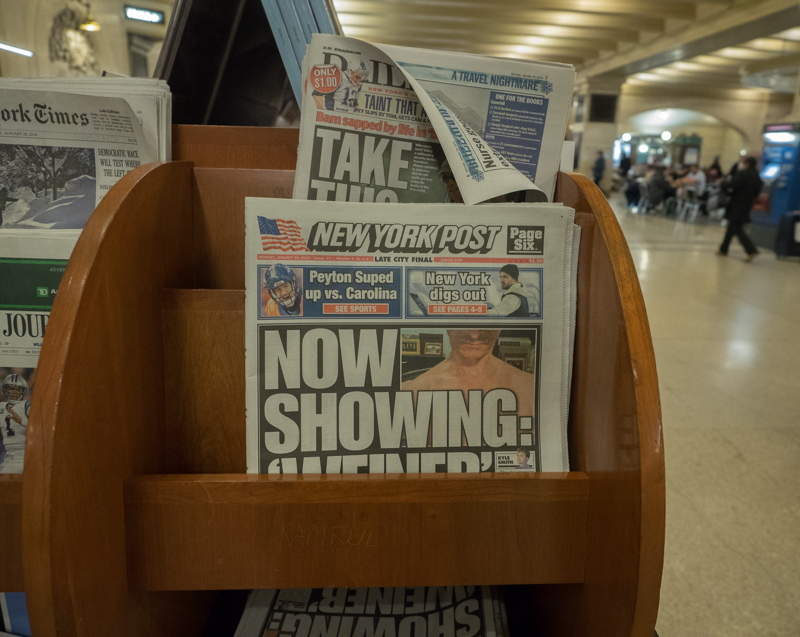