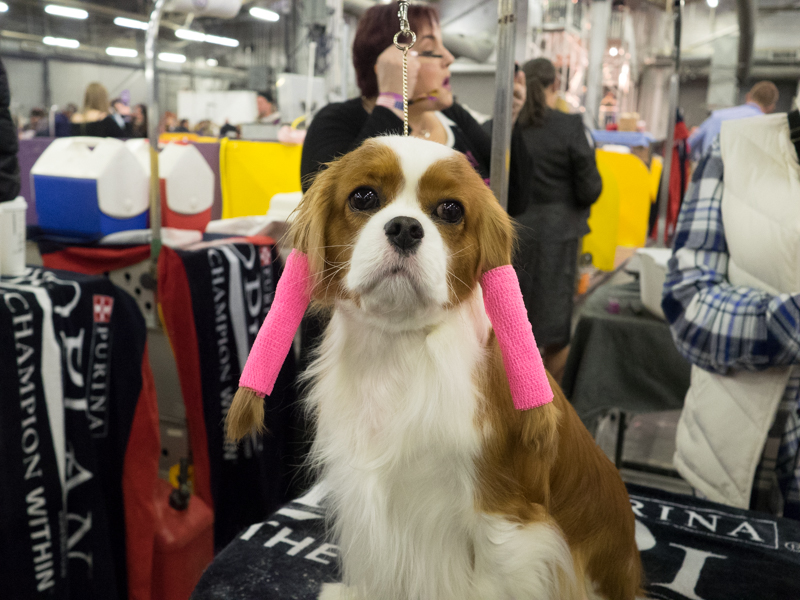 This week is a little different because I was in New York the night before and stayed over. I made a vow in late December that in 2016 we would do EVERY holiday differently.  Coming into NYC, seeing Kyle Cease, staying overnight and checking out the Westminster Dog Show counts as doing Valentine's Day differently.

I was battling a cold..both literally and physically.  Temps on Sunday were FREEZING, and Monday wasn't much better, especially when it started snow/sleeting.  Because of the cold and my not feeling well, this was more of a documenting photographic trip versus creating anything artistic. 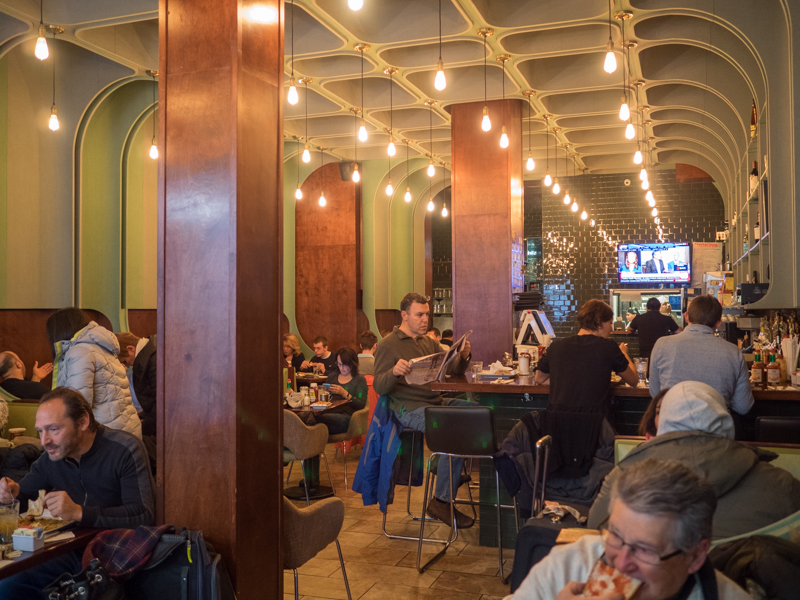 Time Square Diner & Grill: We had breakfast here Monday morning as it was right across the street from our hotel.  As with most NYC places, looked liked a typical diner from the outside but inside it was adorable!  Definitely updated with this 70's feel to it.  Food was terrific. 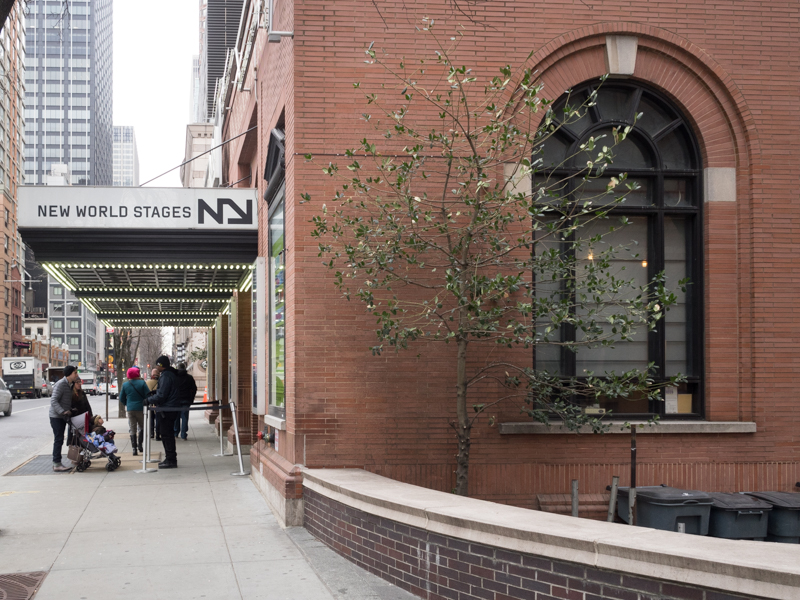 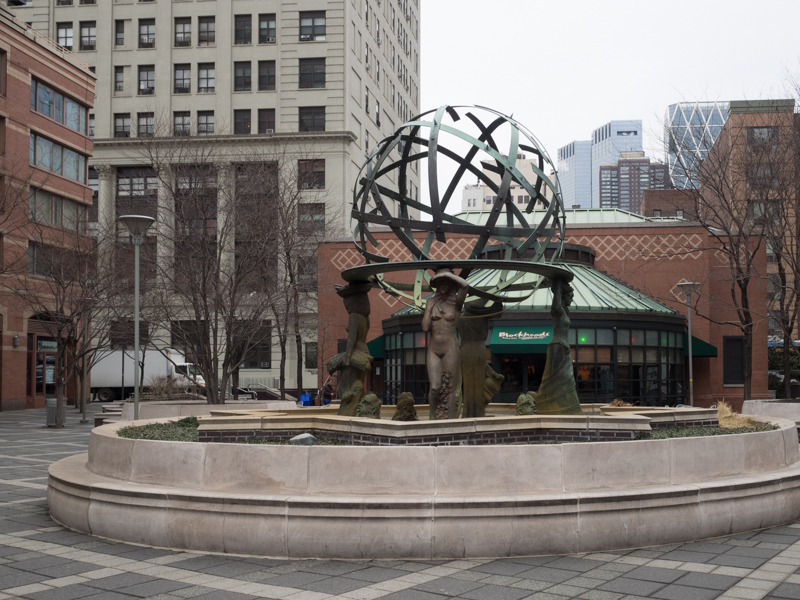 This is where we saw Kyle Cease the night before.  We entered (left picture) and then headed down to the basement which was basically under this fountain area (right picture).  They had 6 stages down there; I believe the one Kyle performed in held 350 people. 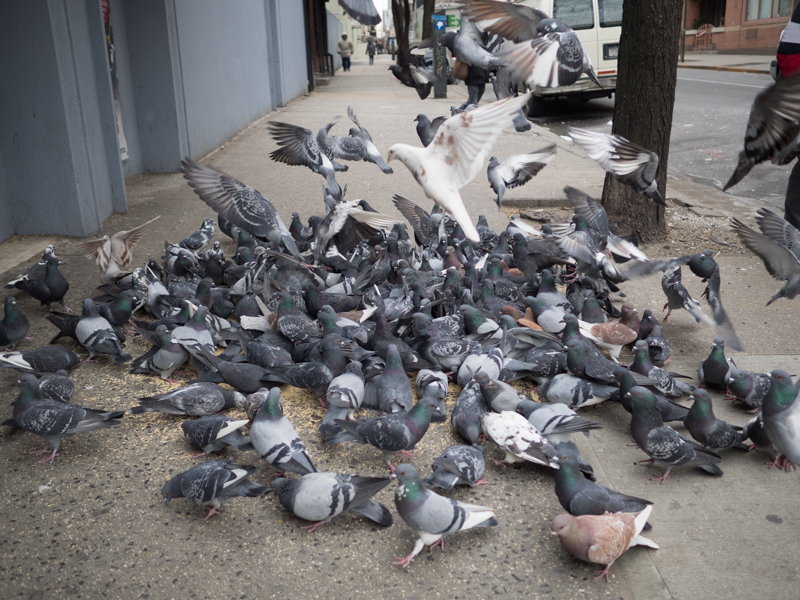 Fooling with shutter speed to catch some pigeons mid-flight.  Someone threw them birdseed which was nice. 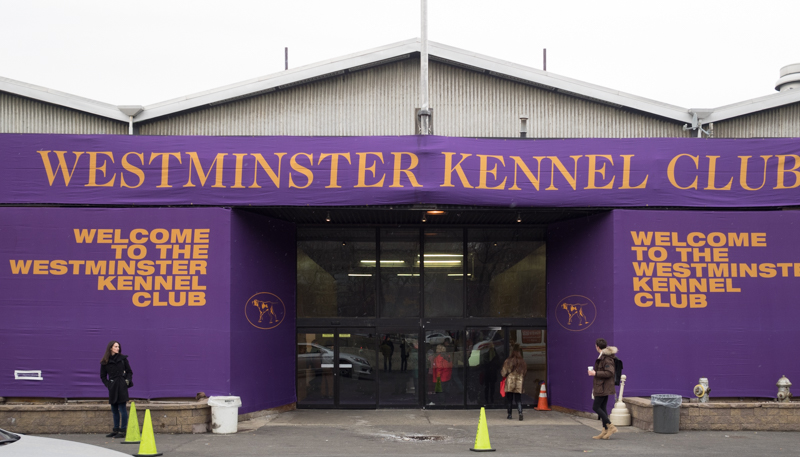 Made our way over to Pier 92 / 94 to check out the daytime activity of the Westminster Dog Show. The big stuff happens at night at Madison Square Gardens. 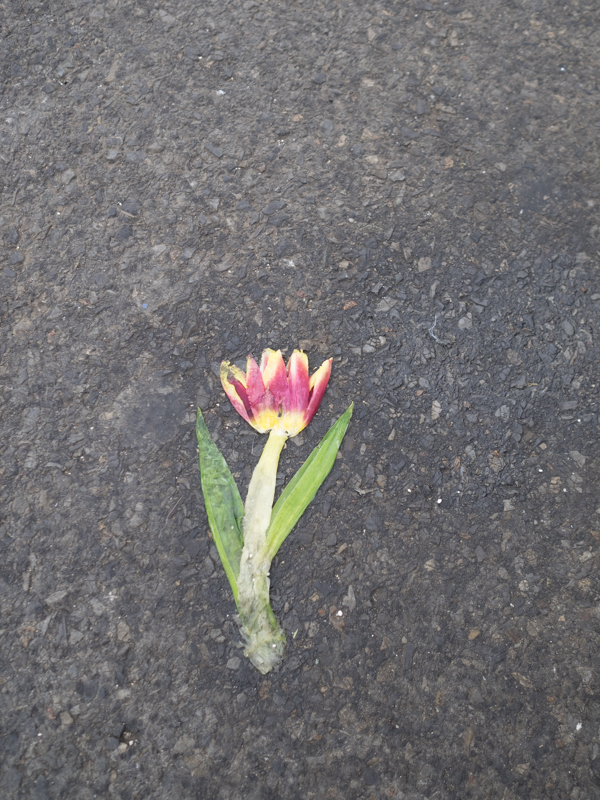 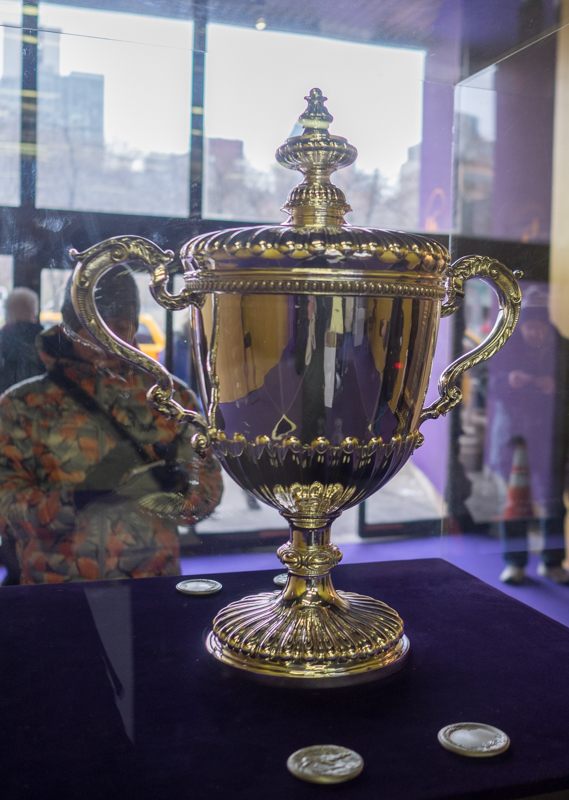 People and their dogs go through a lot of work and expense to earn this.  Kudos on being so dedicated.  I love exploring things like this because it's an entirely differently hobby world I know nothing about. 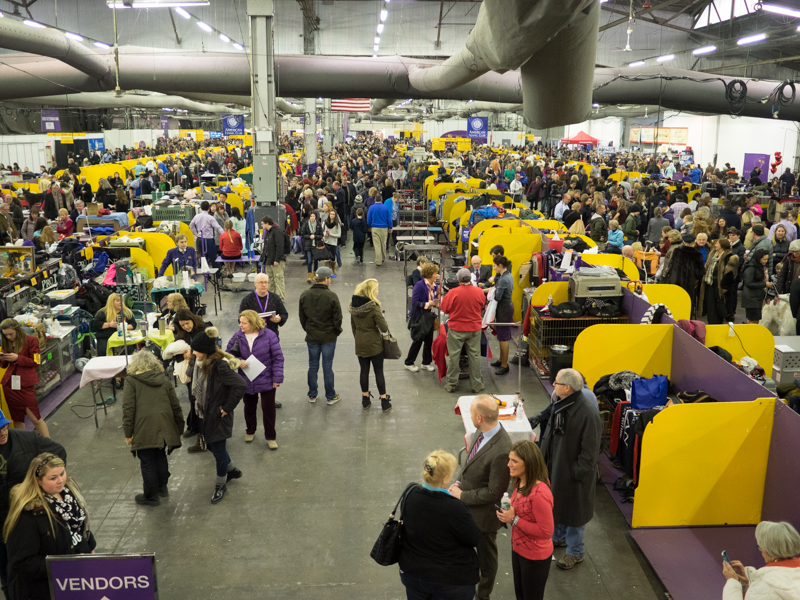 This is the main "benching" area for the dogs on Pier 94.  A benched dog show means the dog must be on the premises the entire time the show is going on (several days!).  They can be away only for grooming, bathroom breaks and showing.  The owners were friendly, as were the dogs.  I thought the dogs would be more hands-off but most owners said you could pet their dog. 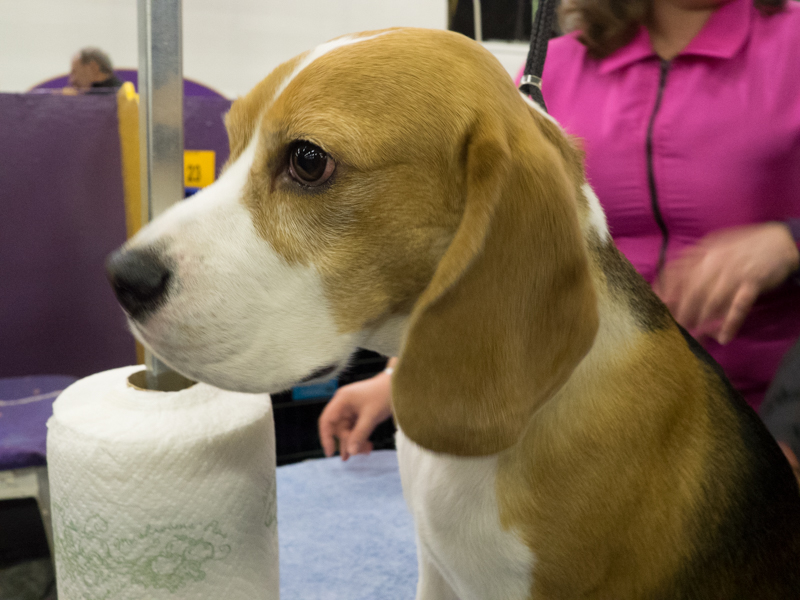 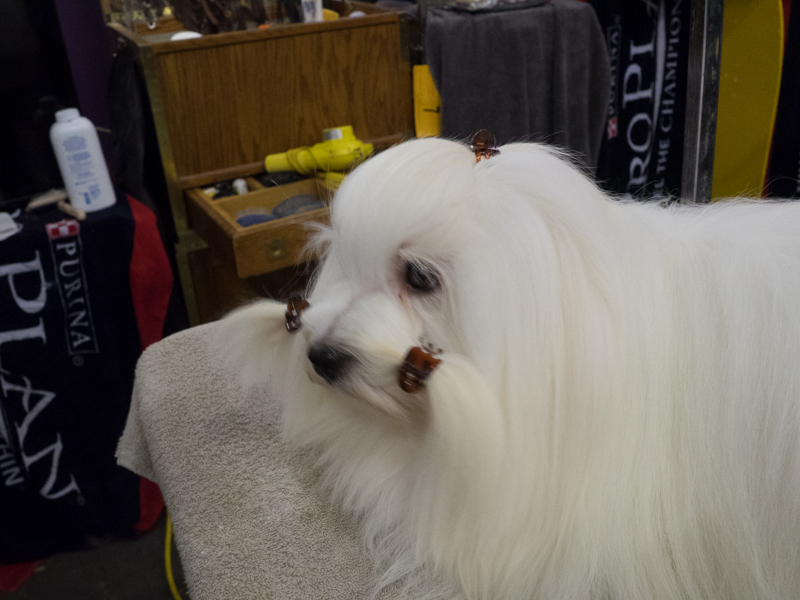 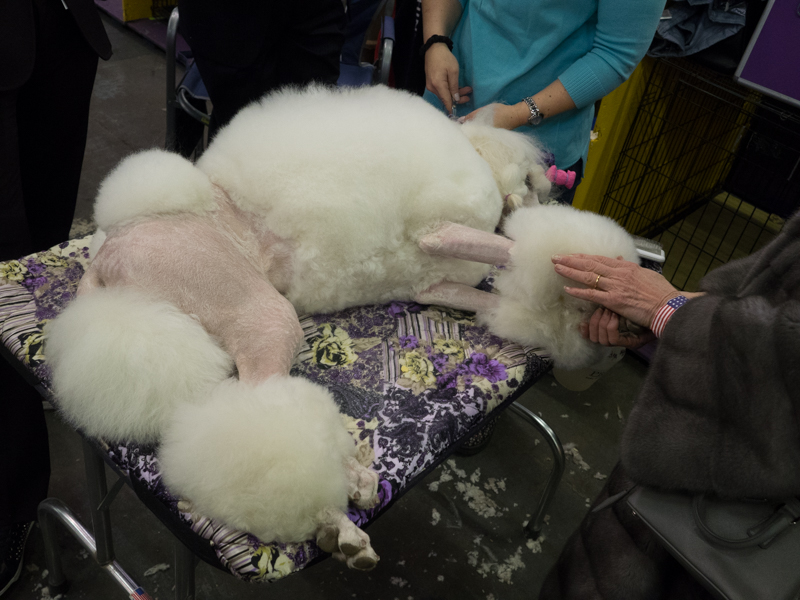 I think her face says it all. 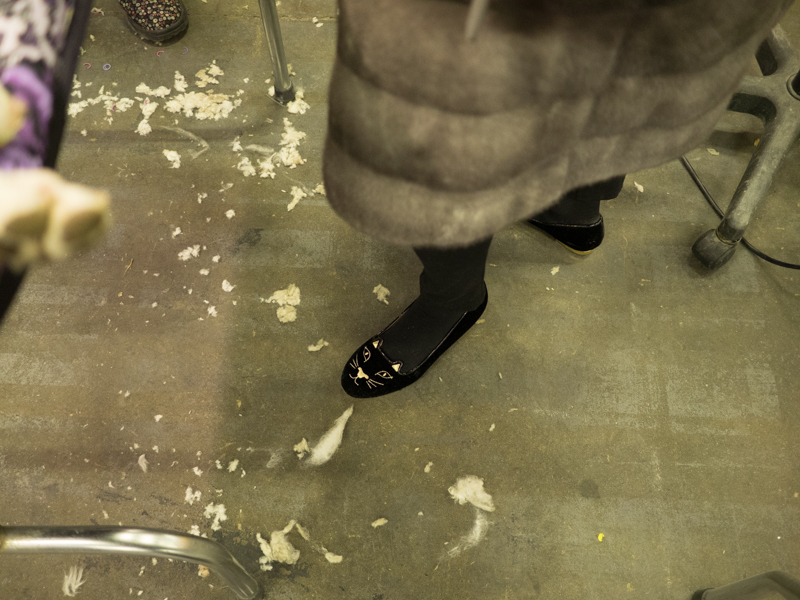 I asked the lady if her shoes were controversial.  She said I was the first to notice them. 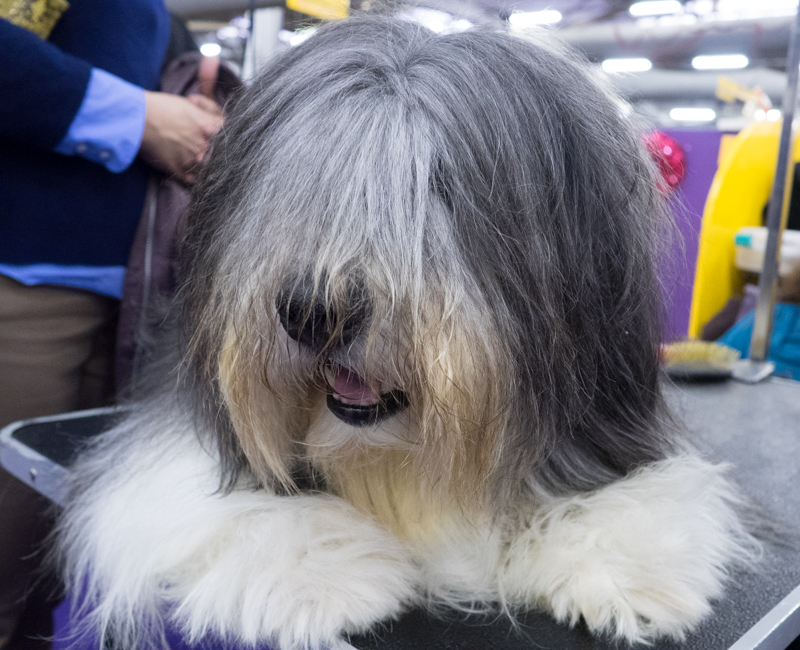 I felt I could relate to this dog since I spent the last 4+ months growing out my bangs. 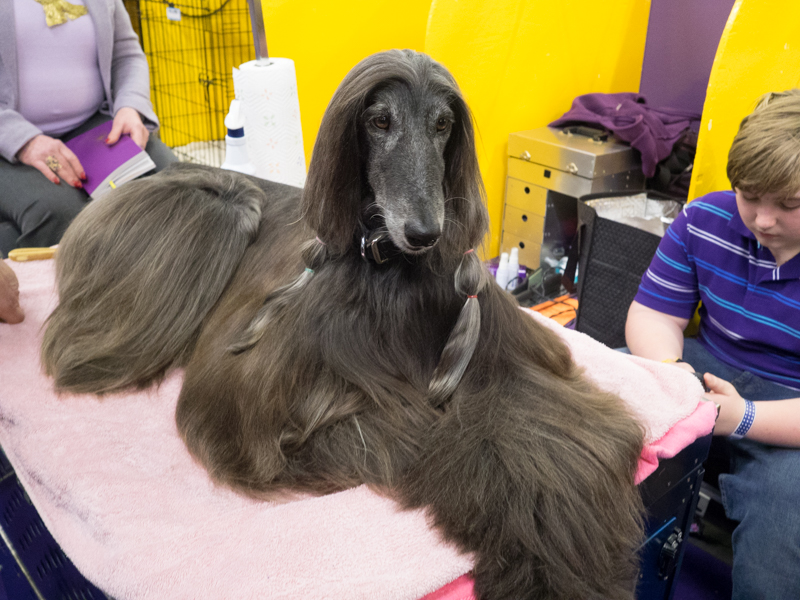 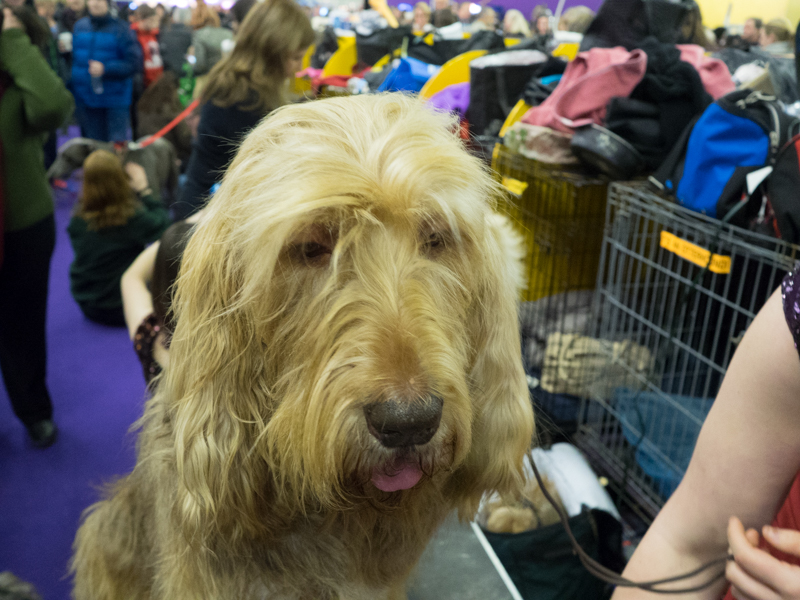 This was a breed I had never seen before.  An Otter Hound. 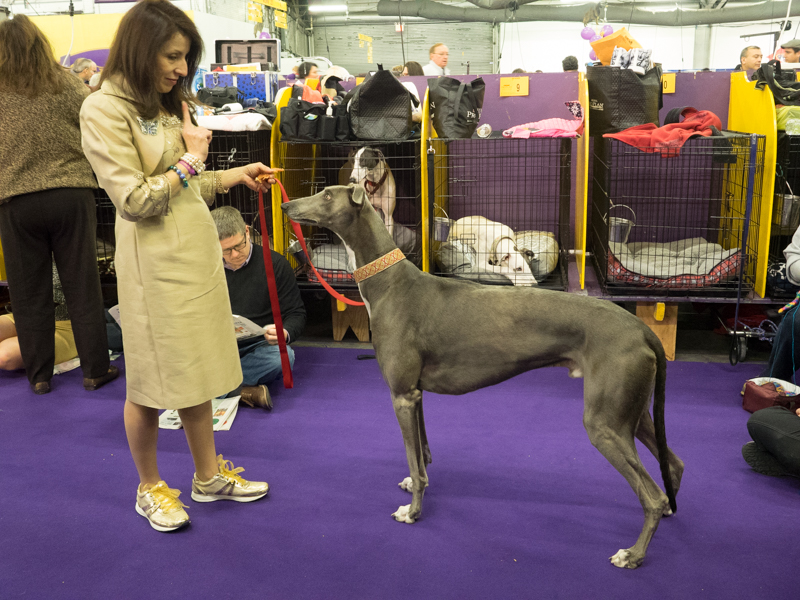 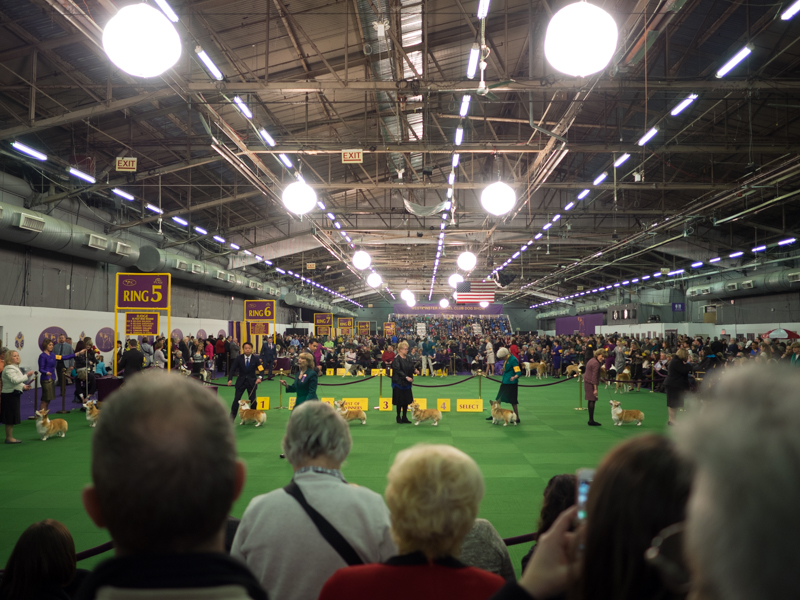 The main competition is at night at Madison Square Gardens but they have qualifying events during the day at the Piers. Corgis in this somewhat blurry photo.  The light in this place was not ideal. 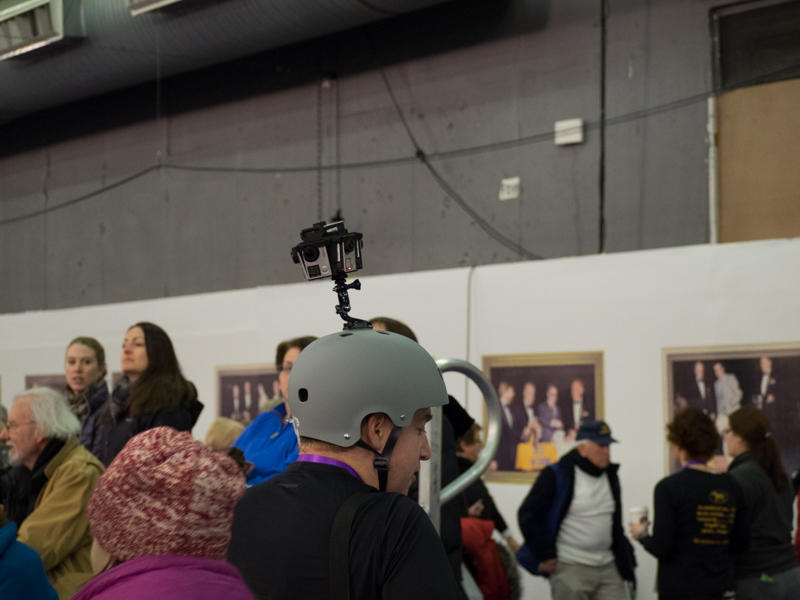 This guy was walking around with a helmut and 360 degrees of GoPro cameras.  Haven't seen that before. I suppose I have his photo and he has me on video!  We're even. 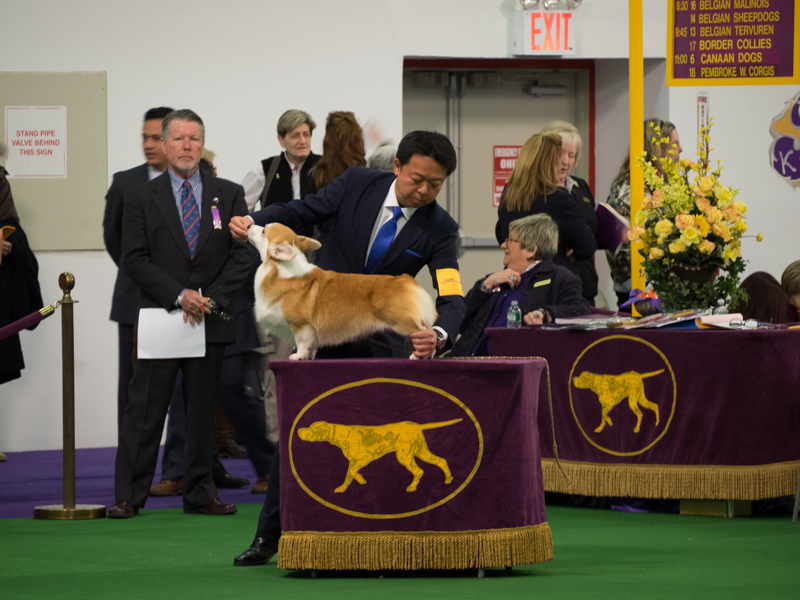 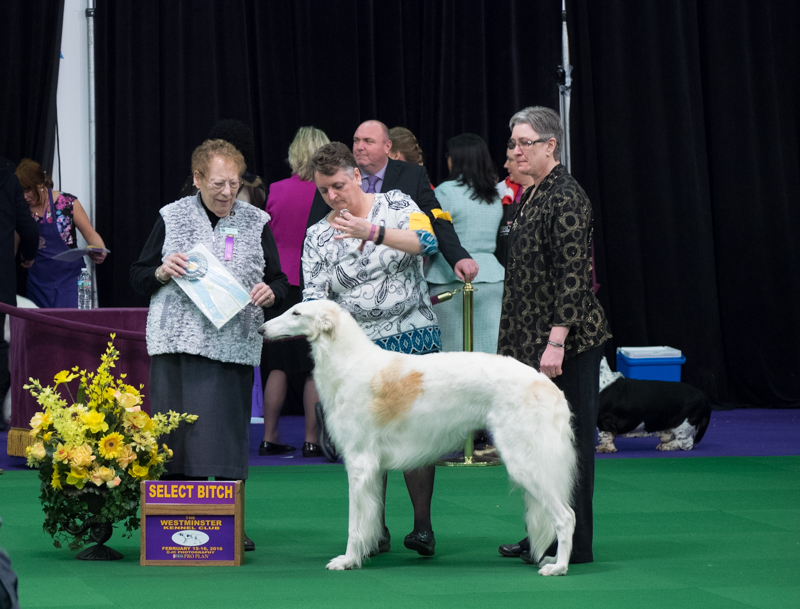 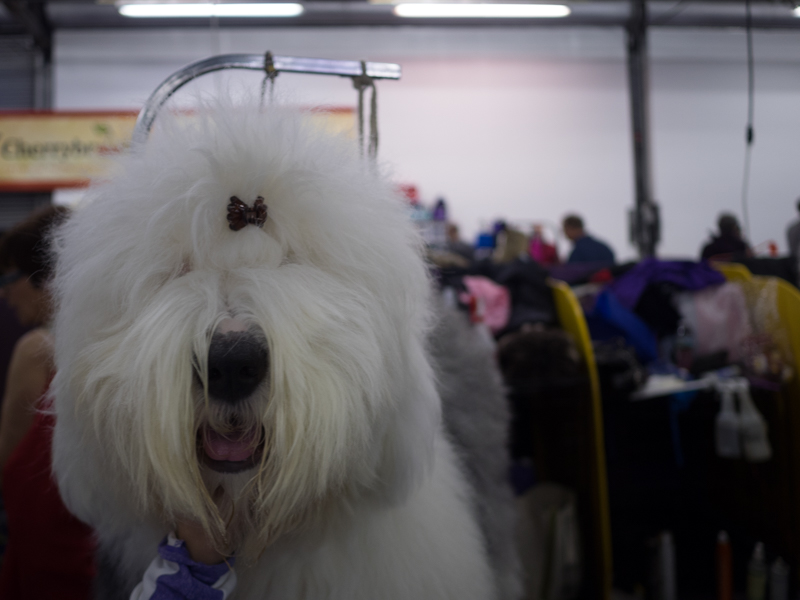 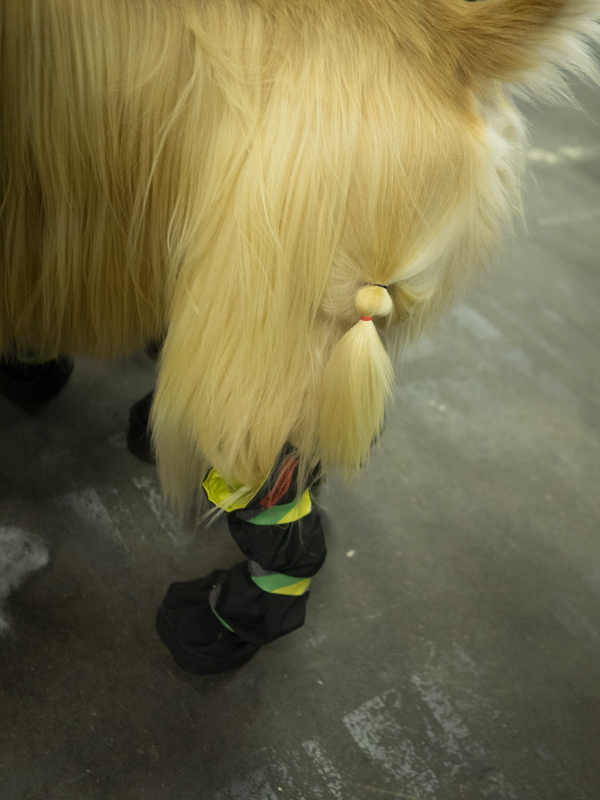 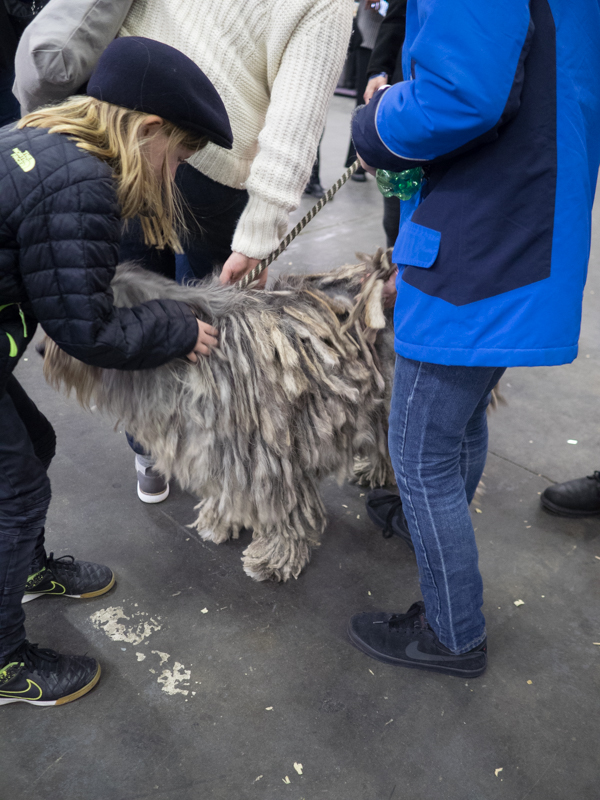 Booties and a dog that looked like a mop! Of course Mop Dog is probably worth more than my car.

After the dog show, we ventured back to Grand Central, walking along 52nd St. for a while. 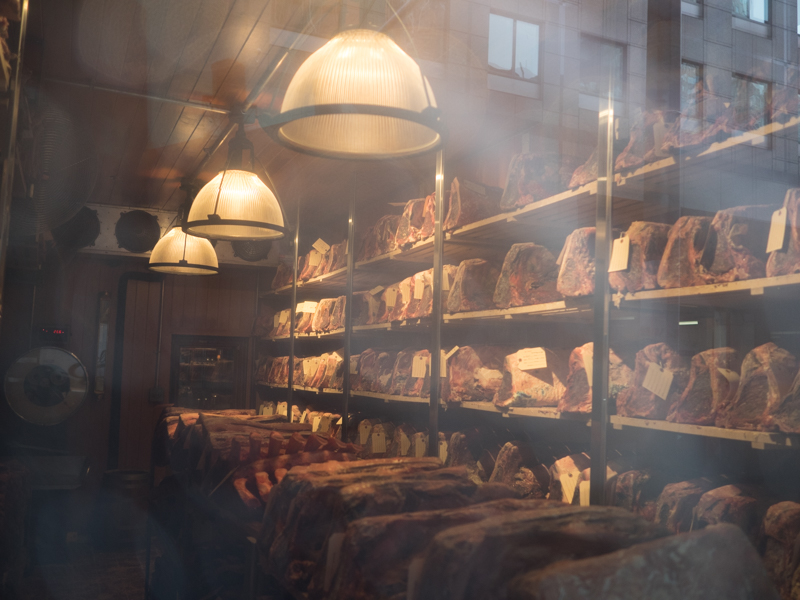 This was taken through a window and I like how it came out with the murky glare on the glass.  Some kind of meat locker.  I became vegetarian in the fall but seeing this doesn't bother me. 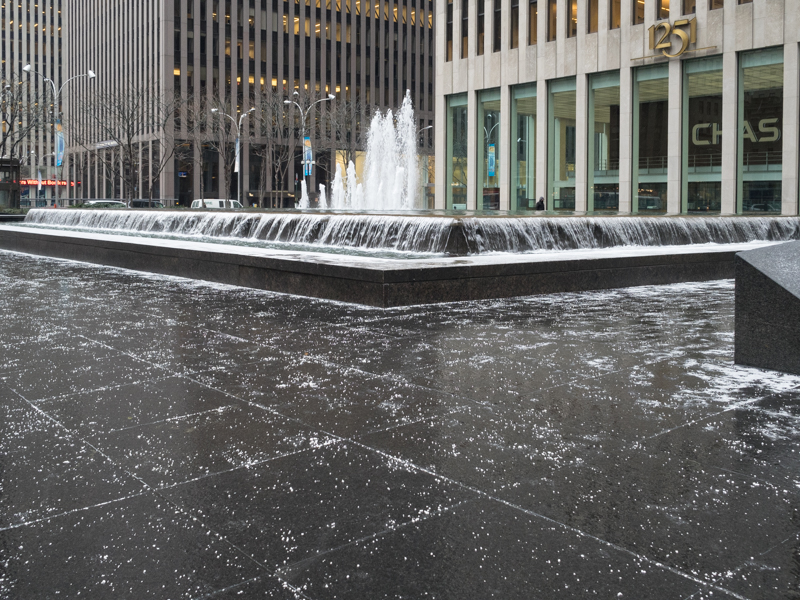 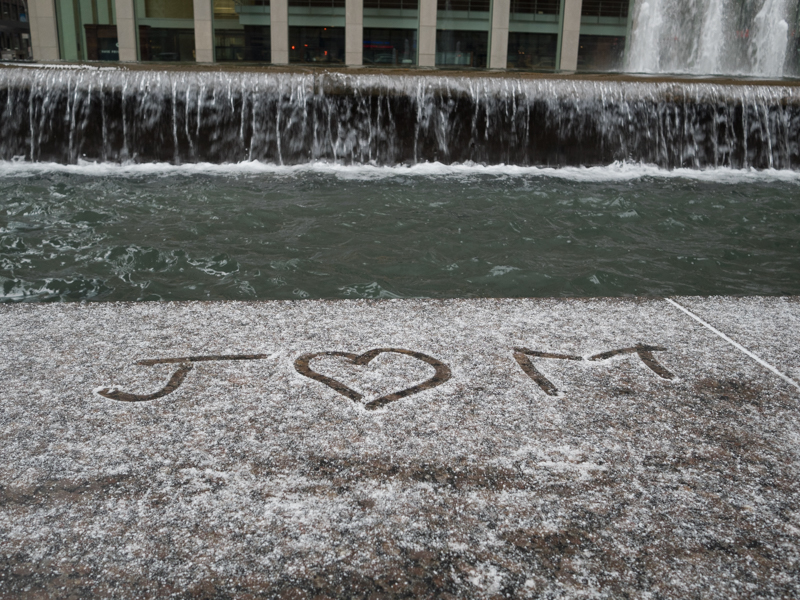 Near Radio City...it was snowing and the sidewalks were heavily salted.  My husband drew our initials in the snow. Awww....

Basically it was miserable walking back to Grand Central.  Slippery and cold.  We were cold pretty much the entire 2 days.  Even the restaurants were cold.

We got back to Grand Central to find it mostly closed.  What?  It was 2:30pm.  You can see the police tape and a cop walking down the stairs in the center of the photo. A power outage in the morning messed everything up.  We were expecting to grab a bite in Grand Central for lunch before our train.  This left us scrambling to find somewhere to eat; Pershing Square cafe across the street was closed, too!  And I quickly realized that the area immediately around Grand Central is mostly shopping and not food. 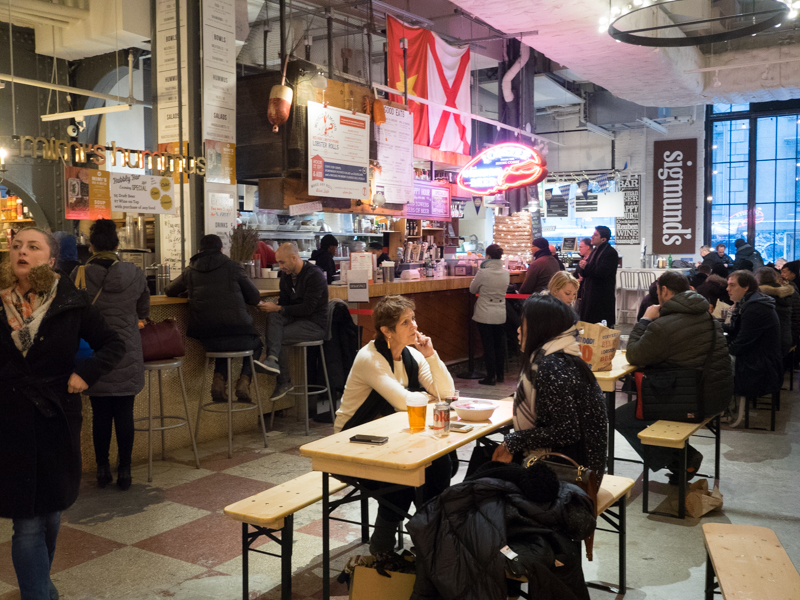 Urban Space to the rescue! What a great place.  If you take the escalators up to the Met Life building in Grand Central, Urban Space is around the corner as you exit the Met Life building.  It reminded me a bit of Eately but without the grocery store stuff.  A bunch of small restaurants serving meals either to go, or you could sit in the middle area at the picnic tables.  Enjoyed an excellent Churro Bean soup from La Palapa (which has its main restaurant in the East Village on St Marks).

I'm sad...because Grand Central was shut down, we had limited time before our train, and I wasn't feel very well, I never got a picture of the New York Post - usually I take it downstairs in Grand Central.  I guess you're going to have to take my word for it that I was there on February 15, 2016.  You can look up the Grand Central power outage.  ;)